New York City, NY -- (SBWIRE) -- 07/25/2013 -- An examination of Busser Howell’s work and career depicts a hugely-successful international painter. However, many will be surprised to learn that Howell grew up without ninety eight percent of his vision and lost the remaining two percent at age forty. In his bold and compelling new book, Howell gives the world a glimpse into the unique and vivid world of blind artists, sharing their stories and getting the voice of the blind community heard.

‘20/20 Blindsight’ fuses facets of a memoir, art book and sociological text to illustrate that people see in the same way, through the use of their visual cortex.

At the age of fifteen, Busser Howell lost 98 percent of his vision. At the age of forty he lost the remaining 2 percent. Were the story to end there you would likely not be entirely shocked as this type of circumstance is not that uncommon. But this is not the whole story—not by a long shot. You see, Howell is an artist—a painter, to be exact. And prior to being a professional, working artist in New York City he was a partner and worked twenty-four years in an interior design and restoration business. Possibly even more amazing than his breaking of our stereotypes of the blind is the fact that he is not alone. Interviewing other blind artists to discover each person’s particular point of view and what kind of descriptions work for them, author and blind artist Busser Howell’s debut is an extraordinary look into a world never before seen or understood from the point of view of the visually challenged. Beginning by examining the concepts of creativity, perception, touch, and accessibility, Howell engages the vibrant, boundless minds of fifteen visually impaired artists to mine their thoughts, feelings, and understanding to piece together a common thread of experience.

It is the artists telling their story, their preferences and dislikes, and their ability, despite their blindness, to tap into sight’s brain-based function to see and comprehend our world and its contents. An enlightening and fascinating journey into the artistic process as seen by those whose vision is either severely impaired or altogether absent, Howell’s impressive collection of writings and interviews is a probing examination of the artistic process and the nature of art itself. Evocative and inspiring, Blindsight is a deeply moving passage that documents the journey of visual artists as they transition from the visual input of the outside world to the output of their inner vision transcending blindness into the light of creativity.

As the author explains, his book will prove an illuminating read for the sighted community.

“Many people ask how artists can paint if they are blind. My book addresses the function of sight, how it is a brain function and how it doesn’t actually occur through the eyes. Blind people can work with exactly the same creativity and perception as any sighted person; it’s all a matter of brain function,” says Howell.

Continuing, “This is the first book where blind artists describe, in intimate detail, how they work. Everybody featured is still a working artist and enjoying the same success as those who can see.”

“I highly recommend experiencing Blindsight. Not only could it change your perspective if you are fully sighted, but perhaps offer inspiration on a number of levels. How Busser and these other artists create such beauty, I do not know, but if one wants to push beyond the bounds of everyday life, it is tucked away in the pages of Blindsight,” says Philippe, reviewing the book on Amazon.

Another reader was equally as impressed, adding, “Busser Howell's book 20/20 Blindsight is an amazingly written and easy to read exploration of legally blind and totally blind artists. The reader can read only the interviews or the narrative and learn so much about blind artists. The stories are interesting and are at the cornerstone of art and the human mind.”

About Busser Howell
Residing in New York City, Howell is an abstract expressionist painter. His most recent works are large geometric forms based on quadrants of three-dimensional applications of paint, paper or other materials applied with his hands to create a single monolithic image that becomes kinetic with the refraction of light on the highly textured surfaces. His past work has included other expressionistic modalities that incorporate paint, paper, screen, and found objects. Earlier series were a decade of abstract dance figures, satirical political paintings and at one time a series of abstract geometric paintings of 19th century farm scapes and urban structures.

Howell’s wire sculpture was exhibited at the Morgan Museum, Lexington, KY. And his paintings have been exhibited at The Philadelphia Museum of Art, The Smithsonian, the Museum of the Permian Basin, Texas and are in the collection of The New Britain Museum of American Art, CT. Originally from Ohio, he attended the Dayton Art Institute, Wright State University, and Boston University School of Fine art. Howell spent twenty-five years as a partner in a restoration and design firm. During this time he was on the board of the Overfield Tavern Museum, Troy, Ohio and was involved in the restoration of this museum, which included a major architectural excavation, and the cataloguing of the museum’s collection.

Howell continued to paint and exhibit in Ohio, Florida, Texas, New York and internationally. He is presently affiliated with the Golden Dawn Gallery, Santa Fe, N.M. 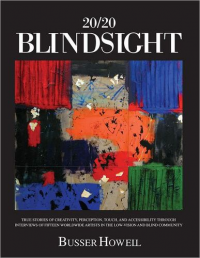