With book one in the series seeing huge success, Cynthia Lee’s work takes readers on a blood-suckingly untraditional journey around the world and into the darkest corners of her imagination.

Tampa, FL -- (SBWIRE) -- 08/30/2013 -- With young adults demanding more from increasingly-popular Vampire fiction, Florida’s Cynthia Lee twists the genre into a modern and suspense-laden cocktail of romance. Intended to be an Avant-Garde take on Vampirism, the series combines mythology, physics, Egyptian history with a dash of Sex in the City, which results in an engaging and sometimes racy read. This tour de force of a modern day vampire story offers its readers an adventure that’s unlike anything written to date.

“A child born to fulfill an ancient Egyptian Prophecy...
The Council seeks to destroy her.
The Elders wish to save her.
And one man is sworn to protect her.”

The first volume in the series, ‘Eternal Rising’, whisks readers on a fast-paced journey through the present and the ancient past: a thrilling ride to so many different places, revealing many different sides of humanity. But watch out, there’s a vampire about.

Auriyanna Delmar has always been a part of a world that she never knew existed. The normal life she tries to live as a dancer in New York City is often anything but. At odds with her surroundings, Auriyanna's dreams seem more real than her life ever has.

After moving on from a childhood plagued with her father's drunken fits of rage, she hopes for a better life in the big city, far from her past. But something was wrong. As she attempts to fulfill her dreams and aspirations, her past follows dangerously close behind her...

Auriyanna never understood who or what she truly was until she met Damion Villarreal. Inexplicably drawn to Damion, she can no longer fight to keep the veil between her past and her present closed-and the harder she tries, the more immersed in her past she becomes. If she is indeed the key to Damion's salvation and that of his kind, then only she can save them from the monsters they proclaim themselves to be. Some want nothing more than the bloodlust to end-for Sekhmet's curse to come to an end-but not all of them want peace...

Take a journey from the streets of New York to the great pyramids of Egypt to the forests of British Columbia to find the answers Auriyanna seeks-follow her on her perilous journey through the world of the living and that of the living dead.

Is she their salvation? And if she is, is she strong enough to survive?

As the author her explains, while always dreaming of becoming a best-selling author, her professional background took her to the depths of the ocean and even into a Hollywood movie.

“A little over four years ago I embarked on a journey to write my first fictional novel for publication and now I am ready to share it with the world. My talents in the arts were recognized at a young age but growing up in a small town in southeastern Wisconsin had its limits - I had bigger dreams. Moving down to Florida I pursued Marine Mammal Training at The Clearwater Marine Aquarium,” says Lee.

Continuing, “I was a part of the most watched aquarium in the world and filmed the Hollywood movie ‘Dolphin Tale’. I fulfilled one dream and moved onto the next working with Lions, Hyenas, Hippos, Lemurs and Vultures at Busch Gardens for a year. Now my sole focus is on my writing.”

To raise vital funds and get her project underway, Lee turned to Kickstarter for a hugely-successful crowdfunding campaign.

“Getting a book into print isn’t cheap. Therefore, I set up a KickStarter.com campaign to allow people to contribute to my efforts. Of course, there were some very healthy rewards being extended to everyone who backed me. We ended up exceeding our goal by over $700!” she adds.

‘Eternal Rising’ is available now in paperback format. Kindle and hardcover versions will be available soon.

For more information on the books, visit the author’s official website: http://www.cynthialee.org. The homepage video trailer has been hailed by many as the perfect introduction to the series.

About the Author: Cynthia Lee
Cynthia Lee was born in 1981 in Milwaukee Wisconsin and grew up in Waukesha County; relocating to Pinellas County Florida in 2007.

She holds a Bachelor’s Degree in Psychology from Carroll College in Waukesha, WI, with an emphasis in Biology/Animal Behavior.

Aside from writing, Cynthia stays true to her art and animal roots as a student/performer in Aerial Arts, through her connection to the aquarium and as a volunteer for a local domestic cat rescue. Cynthia also rescues and rehabilitates local wildlife and continues to spread the word of conservation. 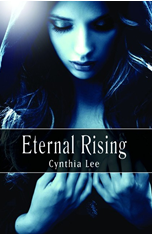