Portland, OR -- (SBWIRE) -- 08/18/2017 -- Antifreeze is an additive that helps to manage the temperature of a vehicles engine by reducing freezing point and increasing the boiling point of the cooling system. It can be developed from either organic acid, inorganic salts, and azoles or a combination of all three. It prevents rigid enclosures from bursting due to expansion from freezing. Earlier, methanol was the major ingredient for engine coolant (engine coolant Market) as antifreeze and was widely used in windshield fluids, but later its use gradually declined due to need of frequent replacement and corrosion of the metals, especially aluminum, used in the engine and cooling systems. Methanol-based antifreeze is substituted by an antifreeze with ethylene glycol as the major ingredient, which possesses less volatility and requires less replacements. (antifreeze prices)

Fill the form for an exclusive sample of this report @ : https://www.alliedmarketresearch.com/request-toc-and-sample/2557

Rise in demand for high-performance vehicles, growth in use of high-quality technologically advance additive, and surge in the automotive industry boost the automotive antifreeze market. In addition, unpredictable weather patterns and surge in use of vehicles globally propel the market growth. However, efficiency of an antifreeze liquid decreases with overuse and at extreme temperature, thereby limiting the market growth. In addition, although recent advancements have reduced the severity and occurrence of problems certain solutions must be implemented to neutralize this issue. (non toxic antifreeze Market)

The market is segmented on the basis of product, vehicle, distribution, and geography. On the basis of product, it is classified into ethylene glycol, propylene glycol, and glycerin. By vehicle, it is categorized into passenger vehicles and commercial vehicles. By distribution, it is bifurcated into OEM and automotive aftermarket. Geographically, it is analyzed across North America, Europe, Asia-Pacific, and LAMEA.

Early buyers will receive 20% customization on this report 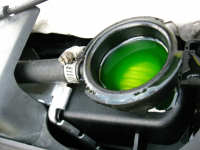