San Leandro, CA -- (SBWIRE) -- 04/25/2013 -- Award winning Triple Threat Academy is nationally recognized for helping kids ages 4 to 14 learn to dribble, shoot and pass their way to a better game at their basketball camps. With summer approaching, TTA has announced their very popular basketball camps schedule in 14 cities throughout the San Francisco Bay Area.

TTA’s commitment to focusing on basketball fundamentals first and games second has won it accolades as the “Best Camp” by Bay Area Parents Hall of Fame. "Our staff of professional coaches offers a solid foundation of fundamental skill development for beginning players and the newest and most challenging development for advanced players," says Triple Threat Academy founder, Tony Freccero.

Triple Threat Academy offers camps throughout the year during school breaks and vacations. TTA offers basketball training camps all over the Bay Area during the summer, Thanksgiving, winter and spring breaks when kids are on school vacation. Each camp is 3-4 days and last from 9-2 p.m. each day. All camps focus on skills and fundamentals but there are several camps to choose from during the summer with skill focuses like dribbling and shooting, offensive skills, total skills, and pro moves competition. The TTA website has a full summer schedule listed with prices, skill sets, age categories and locations. Space is limited but parents can register directly online.

According to TTA founder Tony Freccero, "the goal of Triple Threat Academy summer basketball camps is for all campers to work hard and build confidence in a fun and energetic learning environment." All of TTA’s basketball trainers have spent a lot of the time on the court playing in high school, college or professionally. They love the game and whether they are training a five year old or a teenager they strive to bring out a child’s basketball talent during the summer camps. 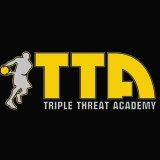