While most film and video students dream of stepping onto the stage in Hollywood to collect their Oscar, breaking into a career of glitz and glamor is no small task. However, according to a new book by award-winning video producer Ted Bridgwater, the opportunities in the corporate video production industry are many, much more easily attainable and often lucrative.

Toronto, Ontario -- (SBWIRE) -- 09/04/2013 -- When picturing filmmaking, the likes of Spielberg, Scorsese, Tarantino and Bigelow often spring to mind. However, with the major Hollywood studios churning out only two hundred and fifty motion pictures a year, finding the Hollywood limelight isn’t easy for the one million students enrolled annually in a film or video production course.

However, a ground-breaking new book for these students is exposing the ‘Hollywood myth’ and urging students to consider a fruitful career in corporate video production. Written by Toronto’s Ted Bridgwater, ‘Boardroom Director: How To Produce Exceptional Corporate Video’ showcases the vast and readily-available opportunities that exist in the corporate sector.

There are over 1200 schools offering courses or programs in film and video production, enrolling over 1 million students each year. And almost every student new to film and video production sees him or herself in Hollywood upon graduation. Yet, the major Hollywood studios produce only about 200-250 theatrical releases in any given year, many of questionable view-worthiness. Even when you throw in TV and independent production, the industry openings for graduating film students are limited.

On the other hand, Corporate Video Production is a huge, well-established and growing opportunity for students as companies everywhere continue to recognize the value and impact of video in all areas of their business, and expanding broadband capabilities make it virtually essential that organizations add high quality video to their websites.

However, almost no student (initially, at least) considers Corporate Video Production as a career. It’s generally not a focus in school curricula where dramatic or documentary production is most often favored.

This book is an exploration of the non-technical aspects of producing successful corporate video, meant to support the technical instruction that people currently get via a formal learning environment, such as college, university or trade school.

It’s this focus on the business side of corporate video production that makes the book unique and invaluable within the marketplace. Chapters include detailed information on how to get that all-important first job, how to uncover a client’s true needs and structure a winning proposal, how to craft scripts quickly and creatively, the essentials of mastering razor-sharp (and profitable) budgets, getting powerful and focused interviews, choosing the most compelling storyteller, ways to maximize results of award competitions and much more.

“Many students come out of film school with great technical skills, but lack knowledge of the vital business aspects of corporate video production. This book bridges the gap between what they know and what they need to know, keeps them on track and ensures they avoid the many pitfalls that can bite back later in their career,” says Bridgwater.

Continuing, “I want students to see that there are very exciting, very diverse and quite often extremely lucrative opportunities available to them in this field. While only a few students will find themselves directing scenes with superstars like Meryl Streep and Tom Hanks, a career in the corporate video world will see them shooting virtually every day, constantly evolving their craft. And that’s the key. That's what every filmmaker wants. It’s out there for the taking.”

Each copy of the book also contains a powerful resource guide, as well as access to downloadable forms and checklists covering everything from A Roadmap To Successful Production and Getting Your Video Off To A Great Start, to Production Budgeting Spreadsheet and Shoot Day Checklist.

While of obvious benefit to film and video students, Bridgwater’s authoritative information will also benefit anyone studying for or exploring a career in the wider communications field.

‘Boardroom Director: How To Produce Exceptional Corporate Video’ is available now in both print and e-book versions. Copies available from Amazon, Barnes & Noble, Kobo and other major retailers.

About Ted Bridgwater
Ted Bridgwater has over 35 years of film and video production experience and over 50 national and international awards for scriptwriting, directing and videography.
He is the founder and President of Foresight Corporate Communications Inc., one of Canada’s oldest corporate communications houses. He has written over 1000 scripts for video and speaker presentations, and produced more than 1200 films and videos. He also does presentation training for senior executives. 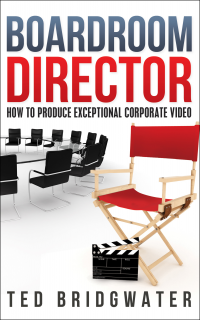