Proving that the best love stories often come from the author’s own lives, ‘D&K’ depicts the stark transition from friendship to lovers. With such real-world relevancy, the book is expected to resonate with readers around the world.

Houston, TX -- (SBWIRE) -- 03/06/2013 -- However creative an author is, the best love stories simply can’t be imagined. This concept is proven by author Mariposa Urbana, as she calls on her own experiences as inspiration for her compelling fiction.

‘D&K’ is a gritty story of friendship, connections and eventual romance.

Dyce is a Nuyo-Rican hustler who is on top of his game with his hands into a little bit of everything. He loves living the lifestyle and has no intention on slowing down but then he meets Kimori. Instantly he’s drawn to this mysterious rose amongst thorns from the bricks of Jacksonville, NC. A passion fuelled romance forms and there is no stopping Dyce and Kim.

Thinking she has found the love she has always desired, reality settles in when Kim discovers Dyce’s life as a hustler. Sex, lies, and the ultimate deceit come along when Dyce s ex-partner decides it’s now his time for a come up and he’s going to take over all that Dyce has built. When Kimori and their new-born son are taken hostage a no holds barred war begins. Any and everybody has become a target to Dyce as he goes into an all-out destruction mode.

The last battle for the throne of the east coast has begun. But once the dust settles will this be the final act to end Dyce and Kim forever?

As the author explains, her book has been in the works for many years.

“This story is very much based on by life back in North Carolina and a man I knew. When we first met he was 29 or 30 and I was only 17. I began writing D&K while we were together,” says Urbana.

She continues, “However, realizing I would only be his ‘little secret’, it came to an end. A few years ago someone told me he had died and I was instantly flooded with inspiration to finish writing D&K the way I would have wanted our life to be.”

“I really enjoyed this read from start to finish, this was a real page turner. The characters were so life like, trying to hang on to a relationship that was filled with nothing but haters. I can't wait for part 2 to come out I will surely be buying that one,” says S. Colbert, who reviewed the book on Amazon.

Another reader, Dia, was equally as impressed. She said, “D&K was a great read full of action from the start. Looking forward to seeing what's going to happen with Kim and Dyce in Part 2. Please don't keep the fans waiting too long.”

About the Author: Mariposa Urbana
Mariposa Urbana is an upcoming author and often refers to herself as "the mistress of the pen". She has had a passion for writing since she could first pick up a pen and began writing poems and short stories at the age on nine. Once she began to take writing seriously she 'became a new woman' and the persona Mariposa Urbana was born. She chose the pen name Mariposa Urbana because "you can take a butterfly to Paris, Rome, or L.A. but at the end of the day it is still just a butterfly. Its surroundings may change but it never will.” Besides being an author, wife and mother Mariposa is also a student in college pursuing an associate’s degree in Paralegal Studies. 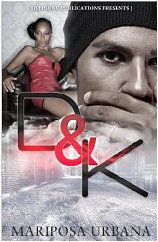