The idea began to burn inside of author Max W. Miller after she met a professional astrologer on the Island of Daufuskie. Max has always experienced vivid dreams and visions about places she’d never visited and for years had wondered if she was actually visiting other time periods from a memory. This book is a compelling depiction of one of those dreams.

Raleigh, NC -- (SBWIRE) -- 04/24/2014 -- Local indie author, Max W. Miller is already established on the literary scene for two books in the Teen and Young Adult genres. This year Max has expanded her writing to include the New Adult category and has spun a one-of-a-kind Paranormal Romance Series—showcasing reincarnation on a college campus. The series title is ‘Egyptian Moon’ with Book one – ‘Return’, officially released at Women’s Empowerment 2014, at the PNC Arena in Raleigh.

The Egyptian Moon Series takes readers into the life of a college freshman, Megan Smart, who thought she had the perfect life—a star quarterback boyfriend, great parents, and acceptance to attend the college of her choosing. But after a trip to the Metropolitan Museum of Art in New York City where Megan touched an ancient Egyptian artefact, a horrifying chain of events unfolds.

- The perfect boyfriend with a bright athletic future...
- The haunting by a demi-god figure from a past life...
- A mysterious teal eyed stranger stalking with his own purpose in mind

Egyptian Moon captures the contemporary drama of sex and frat parties on a college campus, while blending-in the royal splendor of the Pharaohs of Egypt, delving into the life of the most famous queen of all – Nefertiti.

Miller says, “Because of the popularity of psychic television shows, ones such as: Long Island Medium and Reincarnation – Past Lives, and questions I’ve had about my personal experiences, I felt the timing was right for me to research and learn more on the subject of reincarnation and in the process, I created a page turner that you as a reader would pick up and not want to put down.”

Reviews for the novel have been overwhelmingly positive. One reader comments, “I loved the first book in this new series by Max W. Miller. Her characters come alive with bright, snappy dialogue, and interesting characterization. The take on reincarnation was really unusual and well done, and the cliffhanger ending left me chomping at the bit to read the second book Very entertaining!”

About Max Miller
Max Miller was born in Savannah, Georgia, but has lived in North Carolina with her husband and two children for many years. She comes from a large family with eight siblings who have also experienced supernatural encounters.

Max enjoys writing science fiction, fantasy, and all things paranormal because she believes that we have three distinct parts to our being—bodies, mind and spirit (soul), and that other life forms in other realms are just as real as we are. In her writing, Max uses popular fantasy, science fiction and paranormal topics such as aliens, ghosts, and witches, and expresses them in a way that is highly entertaining and thought provoking. 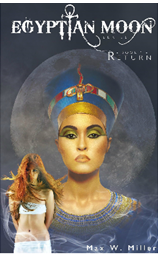