The friends at Little Spear need help to finish their debut Indie Folk Pop album. Be a part of their journey towards raising $3,000 through Indiegogo.

Houston, TX -- (SBWIRE) -- 04/18/2014 -- Little Spear is a robust and dynamic female folk pop and indie rock songwriting duo from the USA Gulf Coast region. Despite humble means and origins, they have diverse and imaginative influences ranging over several generations of popular musical genres both native to the USA and abroad.

Rhonda Roberts and Sherita Perez came together in a bizarre twist of fate leading to their first unassuming show playing some original works and a mini -Talking Heads tribute set together at a ukulele showcase in Austin this past Fall 2013. Joining them on drums for the show, Pauly "Deathwish" Etheredge has since become an integral part of the Little Spear team, assisting in both management/direction and production as Rhonda and Sherita continue to combine their individual talents and fuse their independent musical trajectories. Pauly's friend and colleague, Chris "Frenchie" Smith is a prominent producer in the Austin area whose professional services were enlisted in the making of Little Spear's forthcoming debut album. Together, the collaboration has helped pave the way for fresh new takes on beloved solo repertory compositions of both Rhonda and Sherita and fostered an ambition to create new magical musical concoctions as a songwriting team.

Thos is the second Indiegogo campaign launched by Little Spear. Although they aimed high and fell short in their first campaign, they accomplished much and stayed positive. The previous campaign raised nearly $3,000 with just 44 contributions in just under 3 weeks. Now, they want to raise another $3,000+ in the next 3 weeks.

The break-up for this funding budget is as below

1. Pay off outstanding debt on film production
2. Pay to have the final mix professionally mastered
3. Pay to have CD and artwork printed, and 1000 units duplicated and shipped to Little Spear HQ for initial promo release and pledge fulfillment.
4. Pay campaign fees to Indiegogo and PayPal. 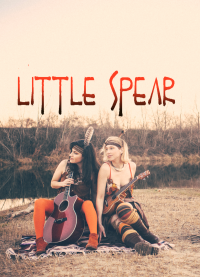