Written by Ziana de Bethune, ‘Forbidden’ takes readers deep into one of the most fraught periods of African American history. While its displays of racism and African American hardship may first appear to be buried by time, the novel also serves a stark reminder that many of its bold issues still exist today.

London, Ontario -- (SBWIRE) -- 08/23/2013 -- America’s Deep South is synonymous with hardships and adversity. Used around the world as an example of society’s interwoven fabric of racism, millions in the region are glad that the 1930s and 1940s are behind them.

However, a raw and powerful new novel by Canada’s Ziana de Bethune brings the period back into the public’s spotlight. Her novel, ‘Forbidden’, also serves the vital dual purpose of reminding the world that racism in the region still runs more than just skin deep.

1941. After spending a year at a prestigious finishing school in New York City, Grace Watts, a spoiled plantation princess, returns to Savannah, to discover that her entire world is in peril. Her family's fortune has been wiped out, her dream of becoming a journalist dies, and her parents' marriage is on the rocks. In all the kerfuffle, someone left a closet door open, and the skeletons are getting restless. Her sunshine-and-lollipops existence swiftly plunges into a dark, secretive hell, and there's nobody she can turn to.

While those she once trusted are “unavailable,” or using her to promote their own agendas, she finds solace in the arms of Elijah King, a beautiful black man employed by her father. Grace was raised to believe that segregation was perfectly acceptable, and that “colored folk” were the inferior race, but as she begins to see the world through the eyes of this wise, intelligent man, her beliefs are turned upside-down on their heads. Elijah not only challenges her mind, but sets her heart – and her knickers – on fire.

If the whole world, and the law, aren't enough obstacles standing between them, there's Charles Trumaine, a powerful millionaire who always gets what he wants, no matter what the cost. He's not above playing very, very dirty to get it. With Grace's family facing ruin, Charles knows the deck is stacked in his favor. One little “I do,” will solve all their problems.

The choice is hers: Love...or money?

As the author explains, her narrative is as important today as the period within which is set.

“This story is important because it sheds a light on the effects that racism against African-Americans, in history, has had. The struggle continues, even today,” says Bethune.

Continuing, “The book is certainly turning heads around the world – and this is intentional. I want the stories of the past to make people think about the present and the future. We can learn a lot from where we’ve been.”

“FORBIDDEN is not the type of book one finishes, then forgets. It lingers. Set in the old South, and anchored between the Depression and World War II, it's a tumultuous saga of romance, treachery, broken fortunes, and disparate passions. But with all FORBIDDEN has going for it, perhaps most memorable is its overview of the deplorable lives that women and people of color suffered through during that dark period of history. Having read de Bethune's VALANTINUS, it's evident that she is a master of plot and dialog. Once the reader commits to the first page of her books, s/he is taken on an unforgettable ride of twists and turns which eventually smooths out to a satisfying, well-wrought conclusion,” says one reader, reviewing the book on Amazon.

Donna Robinson was equally as impressed, adding, “Once in a great while a story comes along that you fall in love with. This is what happened when I read Forbidden. A beautiful love story set in a time when everything was so hard. The whole country was suffering a great economic crisis, looking at a major war and woven into all of this was a love that grew between two people that was Forbidden. I highly recommend this book. The story is riveting. Once you pick the book up you won't want to put it down. Don't be surprised if you fall in love.” 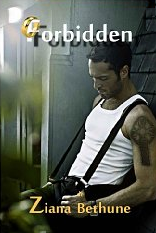