Las Vegas, NV -- (SBWIRE) -- 07/03/2012 -- Just when you think you’ve seen and heard all there is to see and hear from a tune recorded 31 years ago, multi platinum recording artist CHAMPAIGN, featuring lead singer PAULI CARMAN, take their eighties hit “How ‘Bout Us,” to a whole new level, releasing their Patriotic version in video with “How ‘Bout U.S.?”

Executive Producers, Pauli Carman and Brenda Bouschard, Vice President of Artist Development for Mr. Carman since February, 2010, began talking about this project almost from the very beginning of their professional association. Two years in the making, this production was worth waiting for.

With original footage and videography, “How ‘Bout U.S.?” is illustrated in a way I’m sure you’ve never seen before. It’s laced with symbolic depictions that represent the American dream and freedom we all hold dear.

Johnie Lewis Tidwell, Jr., the third Executive Producer and contributing editor of “How ‘Bout U.S.?”, was immediately on board when hearing of this project, offering his own expertise in the field of artist branding and development via television, film and video production. He has worked with Mr. Carman in the field of media development for the last ten years and is the person who linked this dynamic trio together in February, 2010.

CHAMPAIGN’s best all-time classic “How ‘Bout Us” hit number one, ranked in the top 10 for 22 weeks in 1981, and is still receiving International airplay today. Pauli Carman, Brenda Bouschard, and Johnie Tidwell, today’s heart and driving force of CHAMPAIGN, have released their must-see America tribute video “How ‘Bout U.S.?”. 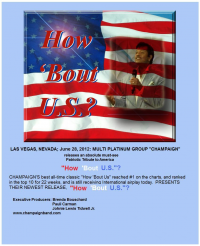