Growing up in Detroit, Roland Bryant has seen the best and the worst of the city. His upcoming film “Heart of Detroit-Still Beats” will unveil these unheard stories relating to the city’s struggles against certain odds.

Detroit, MI -- (SBWIRE) -- 11/25/2014 -- Roland Bryant’s film “Heart of Detroit-Still Beats” will tell the street-side stories of Detroit plagued with urban menace that created a new form of crime in the city’s struggling social scenario. The story revolves around its central characters Lieutenant William Cobs and his partner, detective Cheryl Johnson. Throughout the movie, the two of them will be seen investigating notorious criminal cases in the dangerous streets of the city.

With an ever increasing homelessness and unemployment, Detroit has experienced an alarming rise in the formation of numerous street gangs. As a result, violence and drug addiction has made its way to the streets of Detroit like never before. “Heart of Detroit-Still Beats” is the story of Lieutenant William Cobs, a truculent police officer who at the request of Detroit’s city official, comes back home to Detroit with his own team of commando style police officers in effort to eliminate the criminals of the city.

As an independent filmmaker, Roland Bryant needs funding support to complete “Heart of Detroit-Still Beats” in the best possible way. All funds received from Kickstarter will be spent to cover his filmmaking expenses including

Postproduction: Includes, but is not limited to salaries for the editors.

Distribution & Marketing: Includes, but is not limited to festival submission fees, DVD creation, and backer rewards.

This Kickstarter campaign will end on January 7, 2015.

More information about the campaign is available at http://kck.st/1xIb2wD 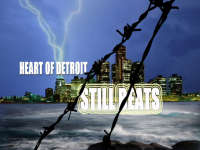