In a new video that is posted on Triathlon-Training.com, an Ironman World Champion talks sex, and candidly offers his thoughts and feelings about this personal and “racy”—no pun intended— subject.

Chris McCormack, who has wowed crowds with his amazing performances in Ironman competitions, recently filmed the video, in which he discusses the pros and cons of sex before sports. While he admits that he feels he performs better in competitions when abstaining from sexual relations a couple of days pre-race, McCormack said this approach is not necessarily for everyone.

For McCormack, the agitation he experiences when avoiding sex gives him a competitive edge during the triathlon. By annoying himself through things like deprivation of wanted activities, McCormack said he arrives at the event revved up and ready to unleash his power on race day.

For women, McCormack said, skipping sex prior to competing in triathlon is a whole different ball game.

“I know a few world championship winning women triathletes in short course racing that went on to win world titles after a session the night before, so I think it depends on the sport,” he said in the video.

McCormack concludes by saying that abstaining from sex before a triathlon may have no scientific merit, but if it helps a person be a better competitor, then he’s all for it.

“It depends on how it works within your psyche, and it depends on the individual, and as I said, for some people it’s been successful, for others, it hasn’t been, and I am all for abstinence for at least a couple of nights for no other reasons than I feel like I want to punch heads in, and that’s a good thing come race day.”

Anybody who would like to watch McCormack’s video about sex before sport is welcome to visit Triathlon-Training.com at any time; there, they can also watch a variety of other videos that offer helpful triathlon training tips and much more.

About The Triathlon Training Website
The Triathlon Training Website is a collection of helpful triathlon training tips and tricks from many of the top professionals in the sport. Clips are all done in HD-Video and are kept under two minutes. Chris McCormack, also known as “Macca,” is an Australian triathlete. McCormack is a two time winner of the Ironman World Championship, winning the titles in 2007 and 2010, as well as the winner of the 1997 International Triathlon Union (ITU) World Cup Series and the 1997 Triathlon World Championships. For more information, please visit http://www.triathlon-training.com 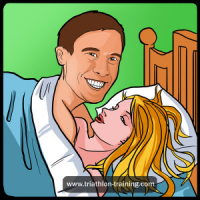