Nashville Couple Is Proof That Love Survives All - Even HIV

Nashville, TN -- (SBWIRE) -- 04/24/2014 -- HIV-positive country singer/songwriter Jimbeau Hinson has a lot to celebrate. On May 9, he will have been married to his wife Brenda Fielder for 34 years, his new album Strong Medicine is out and Beautiful Jim, the award-winning documentary about his life, is making the rounds on the Film Festival circuit. He’s happy, healthy, HIV non-detectable, and on a mission to use his platform to help educate others to prevent the spread of HIV and AIDS.

Hinson is grateful that he’s survived well beyond his initial 6-months-to-live prognosis in 1985. He credits his health and longevity, in part, to his writing and self-care. “Writing and singing my personal truths out to the world has always been my release valve,” Hinson shares.

But Jimbeau’s no-pill “strongest medicine” is clearly wife Brenda’s love. Her love is the reason he is here today, and this love was crucial in 1985, when there was no medicine for HIV/AIDS treatment. Today, they both know and celebrate the power and strength of their love. “The love that Brenda and I express for one another is admired by all because it is the most honest and open relationship anybody has ever seen. Our love is unconditional.”

On his album, Jimbeau candidly shares his Strong Medicine story: how he lives his life today, the realities of his bisexuality, and the painfully-kept HIV secret he hid for many years while he wrote great music for David Lee Murphy, Brenda Lee, Patti Loveless, Steve Earle, the Oak Ridge Boys, and others. Jimbeau feels his gift--his calling--is to be a messenger, to share this poignant, heartfelt, and inspirational Strong Medicine story about truth and love, in hopes he can help someone else cope with their diagnosis or avoid it altogether.

“What I am most passionate about is talking to anybody, everybody really, about AIDS. No one is talking about the current infection rate, the cost of the drugs, the lifestyle that must accompany that cost, and the procurement of these drugs in order to survive,” Hinson says.

He emphasizes, “The HIV statistics in the US are alarming! Every 9-½ minutes, someone is infected with HIV. In 2010, gay and bisexual men made up 63% of all new infections, and among that group, it’s the young men ages 13-24 that are becoming infected at the fastest rate. A woman is infected every 35 minutes, and 20% of those infected are not aware of their status. HIV is not a gay disease; it is a disease that does not discriminate.”

Hinson sees these statistics as a big problem that he wants to help change by teaching that that HIV is a preventable disease, a completely avoidable infection. “I want to be one who not only talks about it, but gets others to take care not to get infected with HIV in the first place,” says Hinson.

Hinson is completing his autobiography--also entitled Strong Medicine--which will be released first quarter 2015, followed by a nationwide speaking tour, and is currently available for interviews and appearances.

For more of the latest news and information on Jimbeau Hinson, visit www.jimbeauhinson.com or follow him on Facebook: www.facebook.com/jimbeauhinsonmusic

About Jimbeau Hinson
Written hits for Brenda Lee, Steve Earle, Kathy Mattea, David Lee Murphy and the Oak RIdge Boys. Also had a virtual smorgasbord of major artist record his songs. Married for 32 years to the love of his life Brenda Fielder. Performs writer rounds around the country and is bravely stepping forward to speak about something he knows all too well, his long battle with HIV. 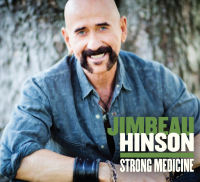