After touring to promote their latest album Hush Hush, Kentucky Knife Fight are poised to unleash more on the music world with their featured track on WiFi PR Group’s Indie Anthems Vol. 6.

Las Vegas, NV -- (SBWIRE) -- 03/31/2014 -- 2013—a fruitful and productive year for St. Louis all-stars, Kentucky Knife Fight—saw the group’s compelling sound receive the recognition it deserves in the form of successful live shows, festival appearances, movie and TV soundtracks, awards, sold-out shows and the release of their latest album, Hush Hush (2013). Armed with a powerful blend of alt-country, blues and punk rock with a hint of pop, Kentucky Knife Fight is out for new fans and fresh outlets to share their music.

As for the band itself, vocalist Jason Holler is known for bellowing poignant, expressive and even graphic lyrics that tell stories of desperate people in a host of settings and situations. He’s backed by a talented group of musicians: Curt Brewer on guitar and banjo, Nate Jones on guitar (both of whom trade off exuberant licks and hooks to accentuate the vividness of their lyrics), Jason Koenig on bass and James Baker on drums. The latter two provide the foundation and steady heartbeat of an elusive brand of music that often evades definition and comparison.

If you did have to compare Kentucky Knife Fight to other musicians, you might venture to say Tom Waits, The Replacements, Nick Cave, Legendary Shack and Shakers, all of whom are named as musical influences, and two of which the group has actually performed with (Legendary Shack and Shakers). They’ve also performed alongside many national acts, including Rev. Horton Heat, Hayes Carll, Lucero, Jason Isbell & the 400 Unit, Holly Go Lightly, Elizabeth Cook, Pokey LaFarge and Rev. Payton’s Big Damn Band.

Besides simply playing with these big-name acts, some of these shows—and other Kentucky Knife Fight shows—have even gone so far as to completely sell out before the band ever took the stage. One of those shows included the sold-out CD release show for Hush Hush, which was a memorable and momentous event for the band in 2013.

Other recent successes for Kentucky Knife Fight include festival appearances at Midpoint Music Festival, Twangfest, KDHX Fest (following a promising showing at the KDHX day show at SXSW last year) and BMI’s LouFest, as the only band representing St. Louis on the festival lineup. Hush Hush peaked at #2 on the CMJ charts at St. Louis’ radio station KDHX 88.1 FM, and they were named Best Rock Band in St. Louis by Riverfront Times for the third year in a row.

Their music has even been featured in media as of late, including the featuring of their successful single “Love the Lonely” in the opening credits for the film 23 Minutes to Sunrise, which was distributed internationally by Netflix and Redbox. Also, they’ve spent the winter writing music for the upcoming PBS series, America: From the Ground Up.

Kentucky Knife Fight’s next big move to kick off 2014 is their much-anticipated winter tour, which will take them across the Midwest and Midsouth. They will promote their new album, Hush Hush, and work with local magazines and blogs to generate a buzz that will continue to garner them new fans across the States. While they may have been voted Best Rock Band in St. Louis, their aim is to be known as one of the best independent rock bands the entire country has ever seen.

Kentucky Knife Fight will contribute their track “Misshapen Love” to WiFi PR Group’s compilation Indie Anthems Vol. 6, a collection of songs from rising international talent, to be released at Toronto’s NXNE in June 2014. The digital mixtape will be handed out to festival attendees on 3,500 download cards, and 1,500 more download copies will be made available on the Indie Anthems Bandcamp website.

Check out videos from Kentucky Knife Fight on YouTube for a taste of what to expect on their winter tour: “Love the Lonely” (official video), Hush Hush CD Release Show (full set) and Live at Plush 8.4.12. 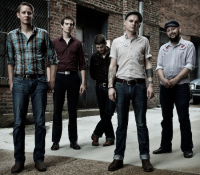