Kickstarter Campaign Initiated for the Market Launch of Maguss Wand

The Maguss Wand allows users to become wizards in the real world by casting spells, defending themselves, and winning duels in their preferred arena. A Kickstarter campaign has been launched recently to complete the development of Maguss Wand.

Matawan, NJ -- (SBWIRE) -- 08/10/2015 -- The Maguss Wand provides an opportunity for all to experience the fun of a fantasy game in the real life. Unlike most other games where the players control the characters, players become the characters in this fantasy game. The goal of these players is to become a legendary wizard by casting powerful spells in arenas of their choice using their Maguss Wand.

Maguss Wand currently offers three game modes with varying complexity and possibilities. Players can have a duel with a friend face-to-face or find their opponents online. It is relevant to mention here that the functionality of the Maguss Wand has nothing to do with magic. This extraordinary concept depends heavily on the three components of Maguss Wand.

The first component is the wand that comprises of a motion sensor and an IR LED. This combination helps the wand to identify delicate motions and transfer it to the receiver. Made of either wood or plastic, the wands can be personalized as per user demand. The receiver is yet another important component that passes the signal from the wand to the mobile application. The third component of the Maguss Wand is the Maguss Mobile Application.

The players can turn the battle mode on with a simple touch of their mobile screen. In the activated state, a player may either challenge or be challenged to a duel. Players will be able to decide which spells they want to cast on their opponent to win the duel. All the moves during the duel will be displayed by the app in real time. Players don't have to check their smartphone every time they get a hit, each spell makes a specific sound effect on the receiving mobile application.

The creators of the Maguss Wand have recently started a Kickstarter campaign with different stretch goals.

This Kickstarter campaign will end on September 14, 2015.

To find out more about this campaign, please visit http://kck.st/1hka6ZB 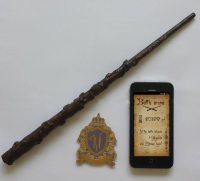