Parrot Passages is an upcoming trivia game from Lucas Intellectual Properties that will contain lots of fun information about the Caribbean and its music. The complete funding requirement for this project is $50,000.

Indianapolis, IN -- (SBWIRE) -- 08/27/2015 -- Parrot Passages Board Game has been designed and conceptualized particularly for people that are looking to attain a Caribbean state of mind. This trivia game from Lucas Intellectual Properties is about sailing sixty-five different Caribbean islands by overcoming the pirates, sharks, and hurricanes. The game has been created by Mark A and Michele "Shelley" Lucas and designed by Jenny Weber Saulovic. The developers claim that this game is ideally suited for board game fanatics that enjoy games that are challenging and full of interesting facts.

Parrot, Shark, and Compass are the three types of cards used in Parrot Passages. The parrot cards are the question cards, and a shark card is drawn when a player lands on a shark spot on any navigational route. Similarly, the compass cards are drawn when a player lands on a compass point on his/her navigational route. There are different types of compass cards such as Margarita, Pirate, Lone Palm, Lovely Cruise, and Shake, Rattle & Roll.

The primary components of the game are:

Talking about the nature of the game, one of its creators says, "The Parrot Passages Board game is not just a game of chance; Parrot Passages requires strategy, intellect, and a competitive edge. Each player or team sails on navigational routes avoiding sharks, while trying to reach compass points and islands. Shaking the salt shaker and answering questions are part of the obstacles facing players before sailing to the finish. Players encounter sharks, pirates, hurricanes, and maybe even a playful manatee during the Parrot Passages adventure."

The prototype of Parrot Passages has been completed, and Lucas Intellectual Properties is currently in need of funding support to start manufacturing this board game. The company has just launched a Kickstarter campaign to meet their funding requirement. This project will only be funded if at least $50,000 is pledged by September 9, 2015.

To find out more about this campaign, please visit http://kck.st/1JyYH4K

About Parrot Passages
Parrot Passages is a trivia game that contains a lot of fun information about the Caribbean and its music for the whole family and friends. The game takes the players to sixty-five different islands fighting off pirates, sharks, and even hurricanes 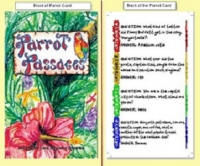 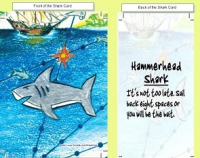