Best Selling Author Jane Velez-Mitchell writes about the inside information she gathered while hosting her show during the Jodi Arias trial.

North Hollywood, CA -- (SBWIRE) -- 08/27/2013 -- A handsome, popular motivational speaker named Travis Alexander dies a horrific, violent, cruel death and the nation watches as his killer, the beautiful and soft spoken Jodi Arias, is put on trial and convicted of his premeditated murder. That’s the bare foundation of the case that’s mesmerized America. But, there is so much more. My new book Exposed: The Secret Life of Jodi Arias is packed with never before revealed information about Jodi’s childhood, her plentiful, kinky sex life, her obsession with Travis and why she became his cold-blooded killer.

Through interviews with friends from childhood on, Exposed answers the question of how a young woman’s psyche gradually disintegrates, how she ultimately becomes capable of elaborately plotting and carrying out this unimaginable act. Jodi had sex with Travis and then lured him into his shower. With Travis naked, dripping wet and in a vulnerable position Jodi then stabbed him in the chest. As Travis staggered around his bathroom and dripped blood over his sink, Jodi stabbed him repeatedly in the back and, as he tried to crawl away, she slit his throat six inches across. Oh, and for good measure, she shot Travis in the face. After she murdered him Jodi drove from Arizona to Utah and had a heavy make out session with another man in Travis’ business circle.

For Exposed-The Secret Life of Jodi Arias, I spoke to those who knew Jodi as an innocent, carefree child and those who knew her in adulthood as a devious, snooping, paranoid email hacker, pathological liar, stalker and master manipulator. So what turned Jodi into this monster? One friend revealed to me a turning point moment in grade school that she feels broke Jodi. She also read me a high school letter from Jodi where the future killer reveals feelings of alienation, not fitting in. But, there’s more.

Jodi Arias is definitely not insane in the legal sense. The petite waitress/wanna be professional photographer clearly knew she was doing something wrong. That’s why she kept her murder plan secret: borrowing gas cans, dying her hair and turning off her cell phone as she slithered into Mesa, Arizona and Travis’ home. After the murder, Jodi Arias tried to establish an alibi and left a cheery voicemail for the man she had just slaughtered inviting him to accompany her to a production of Othello. She attended Travis’ memorial service and hugged his friends. She lied to cops, initially insisting she wasn’t at Travis’ house. Then, when presented with time stamped photos proving she was there, she claimed two masked intruders killed Travis. Finally, after sitting in jail for two years, she suddenly admitted she killed Travis but insisted it was in self-defense. It wasn’t. She was angry he was taking another girl on vacation to Cancun.

This was a rage killing and, with every stab wound she inflicted, Jodi Arias was taking revenge against the world, a world that simply refused… to… give… her… the… life… she felt she deserved.

Exposed-The Secret Life of Jodi Arias takes the reader inside Jodi’s increasingly unhinged and dangerous mind. Jodi mistakenly thought that she could somehow manifest desired outcomes in her life just by talking and thinking about them. She applauded herself as a proponent of positive thinking but was actually hooked on the toxic habit of magical thinking where fantasies take the place of hard work. Jodi Arias consistently refused to take even the basic steps necessary to achieve her lofty dreams. Instead of methodically working towards a realistic and achievable goal, she made grandiose plans and then retreated, with a sense of entitlement, into fantasy waiting for the magic that never happened. Then, she got angry.

Jodi was also a habitual and brazen liar. She lied to police on the interrogation tapes and most observers concluded she lied under oath on the witness stand. Pathological liars are blind to the truth. For them the truth is … whatever they say it is. Lying is just another form of magical thinking.

Jodi Arias was on trial for murder from right after New Year’s Day until the springtime of this year. With the trial broadcast gavel to gavel on HLN, it felt like the whole country was in the courtroom gallery watching and listening to the lurid testimony. January, February, March, April and finally, in May, a guilty verdict.

Well, guess what. It ain’t over yet. While 12 jurors found her guilty of premeditated murder and determined that the way she slaughtered Travis was especially cruel, they could not agree on whether to put her to death. So, very soon, we will find out when Jodi will be retried on the penalty phase to decide whether she will live or die. Exposed: The Secret Life of Jodi Arias offers the definitive story. A portion of the net profits will be donated to charity. It’s a must read as you follow this saga into its final throes. We can all learn something about the dangers of magical thinking. 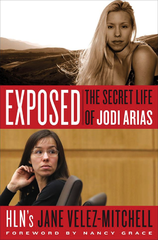