Los Angeles, CA -- (SBWIRE) -- 07/02/2012 -- Muzart and its founder, Pat Melfi, have signed a deal with Musik and Film and President, Stephen Wrench, to exclusively represent the Platinum Library of music in a series of compilations. The Alliance Between Muzart And Musik And Film Will Enable The Platinum Library Of Legendary Music To Be Heard World Wide In Support Of Music Education As It Will Fund Music And Art Legacy In Public School Programs.

Pat Melfi is known in the music industry as a five time promoter of the year and the former VP to MCA Records. Forming a partnership with Ken Kragen, Ted Fujimoto, Brandon Frank, and Ellis Paillet, allowed for the development of Muzart World Foundation, a public charity, that will fund Music and Art Programs. The foundation purchased a large catalog of music called the Platinum Library.

This catalog includes over 900 Top Ten Billboard charting hit songs that represent a chronology of what has made American music what it is today - legends in all genres of music such as: Bill Haley, Little Richard, Bo Diddley, Fats Domino, Alice Cooper, John Anderson, Louis Armstrong, Atalnta Rhythm Section, Count Basie, Beau Brummels, Tony Bennett, George Bonds, Eric Burdon and the Animals, Glen Campbell, Carter Family, Nat King King Cole, Bing Crosby, Merle Haggard. These are just a few of the hundreds of artists within the 5,405 tracks. Rhonda Wrench, VP, Musik and Film, says, “there will eventually be thousands of compilations”.

Rhonda and Stephen Wrench are both former educators who understand that students who have arts-rich experiences in school do better across the board than those who do not. Rhonda says, “we have a passion to make a difference in some way and see this as a great opportunity to do so.”

Muzart World Foundation has many plans that will enhance learning in schools and prepare students to be successful, fulfilled and productive citizens. Their plans include embedding world class music and creative arts curricula in many schools in need of these programs without the extra tax burden or federal funding . This will create the opportunity for children to experience the magical moments of creativity and expression while enhancing the level of higher learning in other subjects such as math and science.

No one can do everything; but everyone can do something in support of a child and the future of music and art education. Together we are empowered to make the difference - especially when it comes to our children and their future. There are no excuses - its our responsibility. 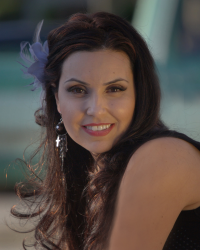