New York, NY -- (SBWIRE) -- 09/26/2012 -- Well-Strung, described as a ‘mash-up of string quartet and boy band,’ is an all-male string quartet featuring classical musicians who sing, putting their own spin on the music of Mozart, Vivaldi, Pink, Lady Gaga, Adele, and more. The group makes the leap to the New York fall music scene after a successful three-month summer run at The Art House in Provincetown, MA. The New York musical production will take place at the The Marjorie S. Deane Little Theater from October 27th through November 10th. For ticketing and other information, please visit http://www.well-strung.com

Well-Strung is comprised of first Violinist Edmund Bagnell, second violinist Christopher Marchant, cellist Daniel Shevlin, and violist Trevor Wadleigh. Together, the foursome had a sold-out debut at New York’s Joe's Pub in NYC in May of this year, prompting TimeOut NY to note that “this hunky string quartet finds the common ground between Mozart and Rihanna.”

Director Donna Drake performed in the original Broadway casts of A Chorus Line, Sophisticated Ladies, Woman of the Year, The Wind in the Willows, 5678-Dance, It's so nice to be Civilized and the original production of The 1940s Radio Hour. She has received an Emmy nomination for TV’s Dear Alex and Annie, 4 Drama Desk Nominations, A Mac Award Nomination and a Theater World Award, and also directed John Tartaglia's Imaginocean, which ran Off Broadway at New World Stages. Arranger David Levinson collaborated with Stacey Weingarten and Donna Drake on Les Enfants de Paris (world premiere NYMF 2011). He is also currently working on music and lyrics for Boys Lost, The Elliot's, and Who Is Prester John?, which are in development. 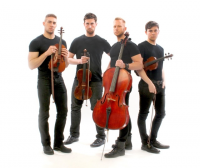