The old fashioned look of newspapers is still popular according to Canadian newspaper template designer.

St. Marys, ON -- (SBWIRE) -- 11/15/2016 -- A graphic designer from Canada has developed an old fashioned newspaper template inspired by the New York Times for Adobe InDesign. Ted Fuller was approached by a client to develop a newspaper - something he had never done before. Ted thought it would be easy to find a template for a newspaper online. It wasn't. "There were very few template options available. I looked through them and decided that none were of the design quality needed for a newspaper," says Ted. "So I went online and printed out the New York Times and designed a template based off that."

You can get this template at: https://graphicriver.net/item/old-style-newspaper-template/5068743

The next template designed by Ted had correct sizing - and it printed on an actual printing press. It is a tabloid sized newspaper. Ted found a company called "Newspaper Club" that would print from a press and ship the newspaper to your door. Ted used this service a few times and then decided to have his newspaper mass produced. "The tabloid size is becoming a close competitor to the traditional broadsheet newspapers. People like the tabloid size because it easily fits in your hands whereas the broadsheet can be unwieldy," says Ted.

The tabloid template is also available at: https://graphicriver.net/item/tabloid-newspaper-template-for-indesign/6982008

Ted then decided to develop a template for Adobe Photoshop - just the front page - to see if people were interested in using it as a flyer. They were! The template was place on Creative Market and has recently started picking up sales. "It is easy to manipulate this template since many people have Adobe Photoshop and are familiar with how it works. This template allows you to easily change the text and images. The images use smart object so you just double click the smart object layer to replace the images on the template."

This template can be purchased at: https://creativemarket.com/ted.fuller/896466-The-Daily-News-(Photoshop-Template)

After building those three templates, Ted decided it was time to develop a modern looking, broadsheet template. "This template was more complicated to build because I used fonts that would actually be used in a newspaper. Therefore I had to sign up for a subscription to Sky Fonts in order to get the fonts I was wanting to use. Otherwise I would have to pay thousands for individual fonts - which is not economical or smart," says Ted. "It may not be as user friendly in terms of getting all the fonts downloaded but it is as close to the real thing as you can get."

This template can be purchased from Creative Market at: https://creativemarket.com/ted.fuller/942527-Modern-Newspaper-Template

Ted hopes that one day someone will make a site where full templates of actual newspapers are sold. "It's nearly impossible for a single designer to develop an entire template. The templates I sell are good - but I designed only a major section of the newspaper. It would be great if someone with access to a full sized newspaper template decided to sell it online." If they do have that interest, Ted would be happy to help in placing this template in markets online.

We wish Ted all the best with his newspaper template sales. 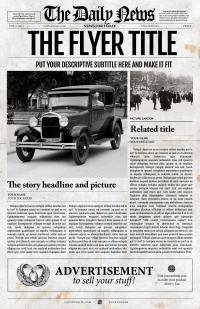 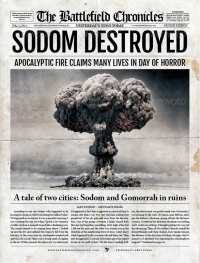