Can a proposed animated film project called “Dormitory II”, about a youth rebellion near Ukraine; written over a decade ago, give hope to the world?

Oakland, CA -- (SBWIRE) -- 04/01/2014 -- “Dormitory II”, is the metaphorical story of many countries and peoples throughout the world; a modern day “Animal Farm”, with kids instead of animals; The President, King or Leader is General Dretch, the Politicians are his soldiers and the rebelling youths are you and I; all coming together at any place, anywhere and anytime on this planet. The story illustrates the Ruler VS Subject paradigm and how citizens all over the world, through no act of their own, find themselves subjugated by unworthy leadership and how if they don’t act to free themselves from it will always lead to ruin.

It’s a captivating story, based on an actual policy, where selected children of murdered Soviet elitist were placed permanently in “holding units”. The children’s situation is not only helpless, but they no longer even believe in themselves to the point of not existing. Enter a five year old American girl, a brilliant child prodigy, a victim of unfortunate circumstances herself; yet too American to know obedience, too American to know hopelessness, just too American. What follows next is a battle of brains over brawn, youth over the status quo and faith over oppressive will; as 21 youths, misfits of the world, show what that the will of the people, no matter what age, race, creed or color, can do anything if they just believe in themselves.

Message: Leadership, unworthy of being followed, shall always lead to doom.

A Truly Great and Soon To Be Classic Story!!

To get the 1500 ready for release story 2 –Page Go to:
http://www.indiegogo.com/projects/dormitory-ii-illustrated-book-and-a-animated-film

Available on Kindle Below:
http://www.amazon.com/dp/B00JALJO0W/ref=r_soa_s_i 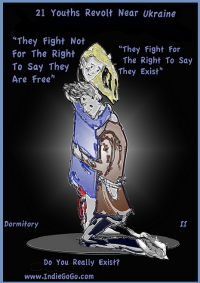