Ocean View, DE -- (SBWIRE) -- 05/26/2020 -- Pacemakers market is expected to exceed USD 4.2 billion in terms of value and 2.4 million units in terms of volume by 2025. Increasing prevalence of several heart- related disorders such as tachycardia, bradycardia and heart blockages is the major factor driving market growth. Introduction of technologically advanced MRI-safe pacemakers and growing geriatric population prone to chronic diseases are some of the other factors that will prove beneficial for business expansion over the analysis timeframe.

Some major findings of the pacemakers market report include:
- Growing population base suffering from heart arrythmia disorder or abnormal heart rhythms will augment the demand for pacemakers, thereby boosting the business growth
- Recent technological advancements in MRI-safe pacemakers has led to long battery life of the device and enabled MRI imaging in patients with implants
- North America pacemakers market held maximum revenue share in 2018 owing to factors such as increase in number of product approvals for advanced pacemakers, rise in incidence of cardiovascular diseases, growing healthcare expenditure and accessibility to technologically advanced products
- The MRI compatible pacemakers market is estimated to show speedy growth over the forecast timeframe as around 75% of the patients with pacemakers, need magnetic resonance imaging throughout their life

Increase in awareness among people regarding the treatment associated with heart arrythmia disorder or abnormal heart rhythms will boost the adoption of pacemakers over the coming years. Rise in number of hospitalizations due to increase in prevalence of cardiovascular diseases will further escalate the industry expansion.

Technological advancements in MRI-safe pacemakers will serve to be another impact rendering factor that will boost the market growth. According to the Diagnostic and Interventional Cardiology, in 2018, all the vendors supplying pacemakers in the U.S., provided MRI-safe device technologies that are cleared by FDA for commercialization. Additionally, other modifications in recently developed pacemakers such as dynamic pacemaking, microprocessor-controlled devices and transitional tissue welding will increase its adoption globally. However, high cost of the pacemakers and lack of reimbursement or insurance coverage in the developing and underdeveloped regions may impede the business growth.

Implantable pacemakers segment was valued around USD 3 billion in 2018 and is expected to witness similar growth over the projected years. Segment growth is attributed to growing demand for implantable cardiac pacemakers that enhance the quality of life in several patients. Also, presence of multiple leads in pacemaker allows smooth physiological functioning of the heart resulting in high product demand, thus contributing to the industry progress.

Dual-chamber pacemakers market is estimated to show more than 3% CAGR over the projection period. Surge in number of people suffering from atrioventricular block will increase the demand for dual-chamber pacemaker devices. The device consists of two leads that are placed in the right atrium and right ventricle. On detection of slow heart rate, the leads function synchronously to mimic the actual physiological function of atrium and ventricle. Aforementioned factors will thus play a crucial role in boosting market growth in the foreseeable future.

MRI compatible pacemakers market was valued more than USD 1.5 billion in the year 2018. MRI imaging has been considered risky for people with electronic implants such as pacemakers and defibrillators. However, recent technological advances have proved to be very effective in manufacturing MRI compatible pacemakers that enable safe MRI imaging in the patients with pacemaker implants. Hence, introduction of such novel products and technologies will spur the industry size.

Make Inquiry about this report @ https://www.decresearch.com/inquiry-before-buying/3776

Application of pacemakers in tachycardia is projected to witness around 4.5% CAGR over the analysis period. Tachycardia is defined as the heart condition wherein the heart beats over 100 times per minute. Segment growth is primarily attributed to increase in number of people suffering from tachycardia. According to the recent research article published by NCBI, the prevalence of tachycardia in 2016 was around 2.25 cases per 1,000 general population. Moreover, ageing population and people with structural heart disorder are more susceptible to tachycardia. Thus, wide application of pacemakers in treatment of tachycardia, will fuel the market growth.

Pacemaker implantation in the patients above 65 years of age accounted for over 75% revenue share in 2018. The need for pacemakers increases with growing age due to functional changes in the heart. Also, according to the NCBI, the geriatric population account for more than 80% of the global pacemaker implantation. Hence, rise in cardiovascular disorders among the geriatric population will upsurge adoption of pacemakers over the forecast period.

The cardiac care centers segment is estimated to grow at a CAGR of more than 4% over the projection period. High segment growth is attributed to factors such as presence of well-trained healthcare professionals, developments in healthcare facilities, easy accessibility and focused treatment related to cardiovascular disorders. Hence, above mentioned factors will further result in industry expansion.

U.S. pacemakers market held over USD 1.5 billion in the year 2018 and is estimated to hold majority market share over the forecast period. Increasing prevalence of heart arrythmia disorder or abnormal heart rhythms in the country will primarily drive the business growth. Moreover, presence of key market players that indulge in extensive R&D activities as well as favorable reimbursement and insurance structure in the U.S. will prove beneficial for the market expansion.

Some of the major industry players operating in the global pacemakers market include BIOTRONIK, Boston Scientific, Pacetronix, Medtronic, Abbott andOSCOR among others. These key industry players engage in numerous strategic initiatives such as product launches, partnerships, mergers & acquisitions to increase their product portfolio and gain competitive advantage over the other industry players. 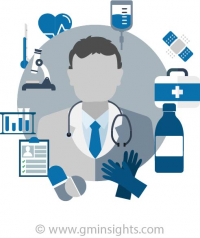