Icon in Music Industry to Save Music Legacy

Hollywood, CA -- (SBWIRE) -- 05/03/2012 -- When you say the name Pat Melfi, you may or, may not know the name because his preference is the “back room”, however, his background and his professional record speaks loud and clear as to who he is and how he will be remembered. Pat Melfi, for those who are not sure is one of music industries most respected names on the business side of the music industry.

A recipient of not one but, 'five time promoter of the year.' Managing concert tours for some of the most recognizable names in music such as Pink Floyd, Vince Gill, Three Dog Night, Guess Who, Tom Petty, and the Eagles, even Grammy artists such as, Juice Newton, Rebecca Lynn Howard, Alabama and Collin Raye, currently managing Multi-Platinum Artists Champaign and World Renowned Actress/Writer/Producer Aura Figueiredo.

Melfi is also, known for his services as the VP to MCA records, serving well over 30 years to the company directly, and through his company The Music Associates. However, his music career started in 1974, while working on the 'Have It Your Way,' Burger King Campaign, while attending Berkeley.

Through his journey he would have experienced three marriages, and three children, while his life lessons would have carried his share of mistakes along the way but, blessing him enough to land back on his feet to realize he had a bigger calling through his faith in God and love for children. This is when his vision began to take form through Muzart World Foundation.

The Muzart World Foundation is a 501 (C-3) Public Charity, organized by industry leaders in music, entertainment, and education. Pat Melfi, (Life long friend and partner) Ken Kragen, (Founder of Right To Succeed) Ted Fujimoto, Brandon Frank, Ellis Pailet, and Philip Cacayorin who are dedicated in ensuring music, and the creative arts will be taught in our public school programs.

Though this organization, has many facets that will highlight some of the funding, and some of the events that will come from Muzart. Their mission is to organize donations, management of intellectual property, technologies, and entertainment assets. To also, develop a curriculum with the goal to reverse systemic failures of education, communities, and family structures that are impediments to the advancement of sciences and creative arts. Finally to build the path to the future that nourishes generations of today’s youth by ensuring that all different areas of human development are cultivated in the school programs, and not just those focused areas myopically, deemed economically prudent to teach.

So where will this journey take us, and when will it launch? The foundations plans are to sponsor an event early 2013, that will demonstrate what is possible when music education is readily available to those children that can benefit from those programs. The Event, 'Each One Teach One.' is merely one of many journey’s to follow. Among those journeys will be the developing of the best project based library in music, and art, and to also, reach out globally. To Produce some of those events will be Conscious Music Entertainment, owned by Nashville known songwriter, Milliea McKinney. Milliea, who has partnered with Melfi, based on her love for music, and compassion for children, and music education. McKinney, the perfect match says Melfi, as he has learned through his professional business relationship with her. “McKinney, is the kind of friend most look for in a life time but, only few are blessed to find.” Melfi, who has made many friends along his journey that have touched his life such as with Trudy Reynolds, who introduced him to the writer's of the song 'Each One Teach One,' that will be featured on their launching tour January 2013, John Durrill, and Jeff Silbar.

When we asked Melfi, what message he would like to convey his response was simple. Donate is the first most important act of compassion but, if that is not an option your time, and social involvement will certainly help in making this cause for our children a priority that should not be ignored. Getting the word out is crucial making both education, and government understand what they are doing when they are robbing the children of the knowledge, and their right for these kinds of programs which should be of major concern to every head of household, and indeed should be re-evaluated. Those wishing to donate or, learn how they can get more involved can do so by going to www.muzartworld.org You can also, show your support by visiting, posting and 'liking' on their facebook site www.facebook.com.muzartworldfoundation 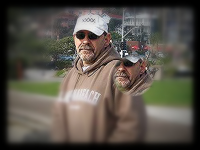