In an emergency, water is one of the most important things to have on hand. The Oasis Water Tank provides plenty of fresh drinking water while taking up just 5 inches of space.

Provo, UT -- (SBWIRE) -- 12/04/2014 -- Anyone who has ever lived in an apartment knows finding storage space is an art. Anyone who has ever tried to be prepared for an oncoming storm (be it snowstorm, hurricane or even tornado) knows water and food require a substantial amount of storage space. As Ben looked around trying to find a good water storage solution he realized every existing method of fresh water storage was just too big. Necessity being the mother of invention, Ben was inspired to design a new slim water tank system over the course of several months. Through his tireless efforts anyone can now have the water they need in an emergency in even the smallest spaces.

Emergencies and natural disaster happen and are going to keep happening. Water is one of the most overlooked supplies when one prepares for disaster. That is until the lines at the local supermarket grow longer and longer with people looking to buy ramen noodles, canned tuna fish, peanut butter and perhaps the most important source of sustenance of them all – bottled water. During Superstorm Sandy, fresh bottled water was one of the first consumer products to quickly disappear off of store shelves.

No one should make the mistake of assuming that tap water is drinkable after a natural disaster strikes. That's because too many people make the mistake of thinking that just because our pipes and sink work, an endless supply of fresh water is available. What people only realize after it's too late is that endless supply of wat3er can be polluted, filled with contaminants and bacteria or just completely unavailable if the pipes themselves freeze after a nasty winter storm that knocks out power and heat – with the water supply being knocked out too shortly thereafter.

Conventional wisdom dictates that the average person should store at least one gallon a day for a minimum of 3 days – per person. That could rack up to several bottles of water that just might not be there. Established standards in water storage tanks are helpful only if someone has ample space in their home to accommodate such a monstrosity.

That's what inspired the Ben and his team to redesign the water storage tank from the ground up to better fit the needs of most people who live in small houses, condos and apartments. Inspiration struck from simple observation; most people have a bed or a couch and most of these have unused space underneath or behind them. That led to the slim design of the Oasis Tank to be placed out of the way and out of sight using space that would otherwise be wasted. The result? A family of five has enough fresh drinking water for three days with no sacrifice of space or quality of life in their home. Someone living on their own can drink all the water they need for two full weeks. 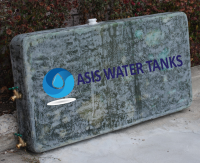