Masterfully crafted by Hunter Murphy, ‘Imogene in New Orleans’ sees southern slang, a gay couple, murder and a dashing English bulldog collide in a light yet gripping novel unlike any murder mystery written before. When a liberal modern family are forced to investigate a death without a shred of necessary skill, their time in New Orleans uncovers a fascinating gay underground society that serves as a microcosm of an evolving United States. Imogene, the unlikely heroine, is already being called “the South’s Miss Marple”, and this is only volume one of the series!

Birmingham, AL -- (SBWIRE) -- 02/04/2015 -- The South has long been a staple literary setting, with thousands of novels showcasing the region's esteemed charm and hospitality. Avoiding all clichés with gusto, however, Hunter Murphy storms the scene with a New Orleans-set mystery that shakes the South up into a cocktail of murder, spunky characters and a real-world exploration of the evolving modern family.

'Imogene in New Orleans' has a unique cast of characters. There's Imogene, a white senior whose fierce independence trumps over any kind of bad feeling toward her gay son. There's also Goose, a handsome English bulldog who makes the perfect companion as the entire family sets out to visit a friend…..and solve his murder.

Imogene Deal McGregor has lived nearly three-quarters of a century in Alabama. She has a penchant for following her own instincts, as well as more grit and spunk than her hypochondriac son, Billy McGregor, and Billy's impulsive partner Jackson Miller can handle. The boys take Imogene to New Orleans with their devilishly handsome English bulldog Goose, hoping to visit friends and attend a second line parade, but moments after arriving in the French Quarter, they find their friend Glenway Gilbert murdered in his art gallery.

Immediately, Imogene and the boys run into a temperamental and ethically-challenged lieutenant who appears hell-bent on neglecting the crime, compelling them to seek answers themselves. As they delve into Glenway Gilbert's murder, Imogene and the boys realize the deceased artist was surrounded by suspicious friends and lovers. With Goose the bulldog by their side, Jackson and Billy seek answers among old friends and new enemies, while Imogene follows her own ideas on the case. But the sooner they solve the murder, the sooner they can get back to catching beads and eating pralines.

"At its heart, the novel explores the rapidly-evolving American family, and our nation's thankful shift toward inclusion for gay couples," explains the author. "Getting such bold messages across required authentic characters, and I spent months developing their personas and emotions – including dialogue in full Southern slang!"

Continuing, "Our leading family goes about their business like anyone else would, and Imogene doesn't bat an eyelid at her son's sexuality. Of course, their trip to New Orleans then rapidly evolves into a full-blown adventure where gay culture forms a central and very important theme. The Big Easy is one of the world's most diverse places, and the perfect playground to solve a murder while exploring an abundance of themes pertinent to modern culture."

The formula has worked with great success. One Kindle reader comments, "This is a fast-paced novel set in New Orleans with rollicking lead characters, including the bulldog, which takes you through their experiences in New Orleans on the trail of the murderer of a friend. A great romp through the French Quarter and other parts of the city encountering some "only-in-New Orleans" characters along the way. Funny, clever, entertaining!"

About Hunter Murphy
Hunter Murphy is a writer from Alabama. Some of his literary heroes include P.G. Wodehouse, Eudora Welty, Christopher Morley, Eugene Walter, and Agatha Christie. He's a fan of good storytelling, no matter the medium. He likes to sit on the back porch and listen to his English bulldog discussing literature and telling jokes.

Imogene in New Orleans is the first in a mystery series featuring Imogene, the boys, and Goose. 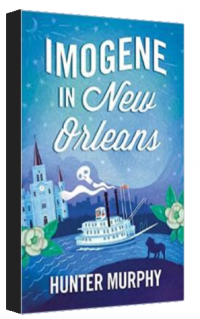