Worldwide Groove Corporation gather up their truly distinctive collection of electronica remakes of jazz standards for "Standard Chill", highlighting their skill for reinvention.

Nashville, TN -- (SBWIRE) -- 02/11/2015 -- With everything from EDM flavors to Bossa Nova beats, Worldwide Groove Corporation's new album "Standard Chill" is an intriguing compilation of all but one of their electronic renditions of famous jazz standards which they've put out over the past decade. Their never before released track "Our Love Is Here to Stay" features a playful vocal performance by up and coming pop artist Daniella Mason over a chilled house beat and light breezy synths. Worldwide Groove Corporation's unconventional treatment of this Gershwin song continues their legacy as masters of reinvention.

Worldwide Groove Corporation came onto the scene with their unorthodox production approaches, like when they featured a French rapper on their smoking hot version of the famous song "Fever." His sexy French rap combined with Missi Hale's sultry vocal over a smoldering slow groove create a combustible synergy that could ignite any playlist. "I absolutely love the process of taking something familiar and treating it in a completely new way," says Ellen Tift, arranger and producer for Worldwide Groove Corporation. "These songs are loved by generations, and we felt that these esteemed works deserved to be celebrated, so we put them into a context that would bring them to a whole new audience." With track elements ranging from fun and offbeat organ riffs to dark and heavy grooves, Worldwide Groove Corporation took license to restyle venerable songs like My Funny Valentine, Besame Mucho, Angel Eyes, Mas Que Nada, Tangerine, and Summertime* in their own notable way.

"We were originally going to only release "Our Love Is Here to Stay" as a single for Valentine's Day," says Kurt Goebel, producer and programmer for Worldwide Groove Corporation," but it seemed like a good opportunity to put all of our jazz standard remakes onto one release." Some of the tracks date back to 2005 when Worldwide Groove Corporation first emerged onto the downtempo scene as electronic artists with a partial release which later became their full album "Chillodesiac Lounge" in 2007. This noteworthy record containing remakes and originals, garnered WGC national airplay on terrestrial and satellite radio, landing them in the #1 spot for several months on the XM Chill station with their original instrumental track Smoke & Mirrors. They also licensed several tracks to compilations in Europe and the U.S. "We consider Standard Chill to be special because it not only features our capacity for reinvention which is what put us on the map with radio, but it is a time capsule of our work from when we first set out as electronic artists," reflects Tift.

But there's no need to look to the past for their glory days because WGC are currently having quite the prolific season. The Standard Chill album is the eighth consecutive monthly release for Worldwide Groove Corporation's "Year of the Groove", where they are putting out one new music release a month for a year. This bold venture began in July 2014 and has landed them on social media campaigns for organizations like Oregon Right to Know during the November 2014 elections, and onto Huffington Post for their Supermodel Astronaut Challenge, a part of their October 2014 release.

For more information about Worldwide Groove Corporation and to hear all of the music from the Year of the Groove to date, go to http://www.worldwidegroovecorp.com. Mailing list members often get special privileges and free downloads of releases. "Standard Chill" is now available through major digital music distribution outlets.

*The one track WGC were unable to include in this collection is their version of The Man I Love from their Chillodesiac Lounge album, for which they no longer own the rights to the master.

About WGC
Worldwide Groove Corporation are Kurt Goebel and Ellen Tift, specializing in electronic pop and downtempo chillout music production, string arranging, and remixes. Their music has been featured on national television shows, in independent films, and used in major brand advertising campaigns in the U.S. and Europe. Both members of WGC have a Master of Music degree in Media Writing and Production from the University of Miami in Coral Gables, FL. 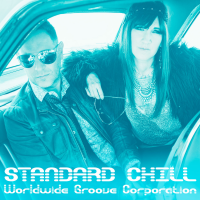