The Path of Heroes; Navy Servicewoman Injects Much-Needed Dose of Diversity Into YA Fiction, with Compelling 'Chosen' Series

Kyla Price’s ‘Chosen: The Path of Heroes’ fuses four friends’ fantastical quest to overthrow an evil enemy with an adventure that celebrates diversity, courage and friendship. Serving in the U.S. Navy, Price knows the importance of fostering good character and resilience. At a time when few Young Adult Fantasy books dare push boundaries, Price is quickly proving that high-adventure and life-lessons can coexist peacefully.

San Leandro, CA -- (SBWIRE) -- 02/25/2015 -- Kyla Price knows a thing or two about diversity. She comes from a close interracial family and, currently on active duty in the Navy, has been exposed to places and situations that buck all societal trends. Now carving new ground as a career author, Price is weaving all of her wisdom into a bold new YA Fantasy series comprising a whopping seven volumes.

But the 'Chosen' series isn't just pages of mindless thrill. The entire story is crafted to celebrate diversity, expand readers' cultural horizons and impart potentially life-saving lessons on morality. Volume one 'The Path of Heroes', gets the saga off to a nail-biting start.

Follow Zuri, Phenyo, Ra, and Evrik as they began their quest against a deadly and formidable foe. In this first book of the Chosen series, the teens meet for the first time and discover they have a part to play in a prophecy that's thousands of years in the making. Their travels take them between dimensions from Earth to the fantastical world of Kambia, preparing them for the ultimate showdown with the Overlord who has threatened to destroy and conquer not only Earth and Kambia, but all other worlds as well.

Join the teens in their journey, then be prepared to see what happens in the next book of the series, Chosen: The Two Battles.

"The big thing readers will notice about this series is that the main protagonists are black, something you rarely see in modern fiction," explains the author, who has recently returned from service in Japan. "Our nation is rich and diverse; the cultural makeup of my family alone illustrates this, and it's vital we expose young people to it so they can embrace and celebrate our shrinking world."

Continuing, "While of course steeped in fantasy, the novel's strong themes of the consequences of bullying and the values of friendship and love transcend any one particular genre to hold universal appeal. Both youngsters and adults from all corners of the planet can revel in this adventure that itself knows no boundaries."

Since its release, the book has garnered a string of rave reviews. Sasha McDaniel comments, "This book was a great non-fiction book, very great story line. For those looking for a great read...Pick this book up & you won't be able to put it down until you finish."

Another reader adds, "I really found this an interesting book and it was quite well written. I really liked the magical other world part of the story and once I started reading it, I couldn't put it down. I'm a big fan of Harry Potter and I loved the magical wizard aspect of the story. This was really a good read and I would like to see a sequel to it."

With six more volumes in the works, readers are urged to get started on part one without delay.

'Chosen: The Path of Heroes' is available now: http://amzn.to/1AGkJxR.

About Kyla Price
Kyla has always enjoyed writing, but it wasn't until recently that she decided to pursue a career in it by finally publishing her first book, Chosen: The Path of Heroes. From the age of ten all the way up to the time she joined the United States Navy at age thirty, she had been in a family band alongside her younger sister and brother. For twenty years, this is how they made their living. 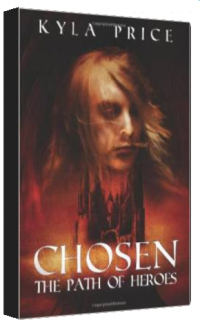