Miami, FL -- (SBWIRE) -- 05/06/2015 -- Rafael Luciani has taken upon himself to help spread the word of Oscar Romero, the archbishop of San Salvador. Romero was a spokesperson for the poor, needy and oppressed, revealing the truth about human rights violations and the cruel exploitation of the country's citizens.

In 1980, at the age of 63, he was assassinated as he was celebrating a requiem mass.

"His weekly sermons were legendary and gave hope to the communities suffering terrible repression," recalls Luciani. "He is beloved in Latin America and throughout the world as a Vatican II Bishop who made a fundamental option for the poor and gave his life for his people."

Luciani plans to translate into English, print and distribute six volumes of Romero's homilies (sermons). Each volume is about 500 pages. Volume 1 is currently in the works, with plans for a July release.

From the time Romero was named archbishop of San Salvador in 1977 up until time of his death, he delivered 193 homilies that were broadcast to the nation by radio. These homilies were later transcribed and published in six volumes in El Salvador.

"The homilies are the impassioned voice of a prophetic pastor addressing his people and his nation at a time of unprecedented crisis and violence," says Luciani. "Romero unrelentingly condemns the repression of the people at the hands of the powerful and resolutely commits the Church to the difficult and dangerous struggle for justice and human rights."

In 1980, at the age of 63, he was assassinated as he was celebrating a requiem mass. In 1993 a United Nations-sponsored truth commission concluded the archbishop's assassination was carried out by a death squad.

This huge work will permit Romero`s theology of peace and justice to be known for readers worldwide and will expose a new and controversial vision of the Latin American Theology and its Church.

The Complete Homilies of Oscar Romero: Volume 1 will include Romero's first 46 homilies, delivered between March 14 and November 25, 1977.

The budget for this ambitious project is $20,000, with funds needed for translation, editing, design, printing, shipping and marketing. In order to generate this funding, Luciani has launched a Kickstarter campaign, which can be viewed at https://www.kickstarter.com/projects/convivium/the-complete-homilies-of-oscar-romero-volume-1

Donations of any amount are welcome. For $39, backers will receive a copy of Volume 1. A $100 pledge is good for a copy of Volume 1 plus one book on Christian meditation. Your contribution can make a huge difference.

"By supporting this cause, you will be helping to spread the word of a brave and heroic person," Luciani says. "His words are truly inspirational and we would like then to be read by as many people as possible.

Luciani can be reached directly at convivium@conviviumpress.com 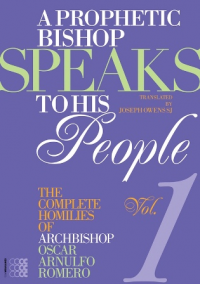