Matthew Goldstein’s upcoming feature length film ‘River of Dark Purple’ is about an old landlord battling hallucinations, his death, and his past while looking for his daughter’s murderers. The complete crowdfunding requirement for this project is $175,000.

New York, NY -- (SBWIRE) -- 06/23/2015 -- River of Dark Purple is a feature-length narrative film from Matthew Goldstein, a rising sophomore at Dartmouth College. The central character of the film is Polish émigré Sam Raczynski, and the story revolves around his battles with illness, his demons, and eventually his friends. In order to avenge his daughter's murder, Sam seeks the help of Wesley, a tenant whose innocence is stolen over the course of the investigation.

Matthew mentions that this film is about what makes people right or wrong in an ever-changing world, and whether that even matters. Writer and Director Matthew Goldstein has the track record of successfully writing and directing feature length movies in the past. Alongside a highly talented team, he has everything needed to start the pre-production of River of Dark Purple. Matthew has written the award-winning script, inspired by a term paper on Don Quixote. With the teaser, storyboards, and tons of pictures, the team has also plotted out how the movie will look.

"We have a vision for the movie: like a ballet amidst a battle, River of Dark Purple will portray beauty where there is none, and destruction where there shouldn't be," Matthew says. Unfortunately, Matthew and his team needs funding assistance to make any further progress.

Their crowdfunding requirement is $175,000, and an Indiegogo campaign has been launched to raise this amount. Proceeds from this campaign will be used for

- Cast (paying the dedicated actors, some of whom may be faces seen before)

- Crew (paying the experienced and talented sound, lighting, and other crew)

To find out more about this campaign, please visit http://bit.ly/1Sw23Gn

About River of Dark Purple
A directorial venture from Matthew Goldstein, River of Dark Purple is a feature-length narrative film that follows Polish émigré Sam Raczynski as he battles illness, his demons, and eventually his friends in gritty New York. 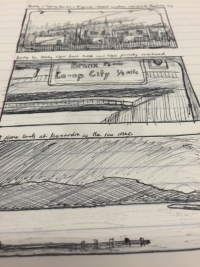