Written by Connie Knight, ‘Chances Choices Changes Death’ is a tale of romance, family ties and murder in the heat of a Texan summer. Fans of the series will be thrilled to see Caroline and Janet back in action in this intricately plotted follow-up to Knight’s debut novel, ‘Cemetery Whites’.

Houston, TX -- (SBWIRE) -- 04/23/2014 -- Author Connie Knight puts her rich history of working and living in Texas to wonderful effect in her celebrated series starring amateur sleuth Caroline Hargrove Hamilton. In the second installment, ‘Chances Choices Changes Death’, readers are introduced once more to Caroline’s world and the complex cast of family members, friends and townspeople who inhabit her slice of Texas.

As the heat encroaches upon prairie ranch land like melting molasses, Caroline and her cousin Janet find themselves embroiled in the mystery of Myra Cade. ‘Chances Choices Changes Death’ follows Myra, a young woman who must identify the father of her child, before her own Dad dies of cancer. As Myra travels further and further down a dark path, her journey ends in murder and a town reels with shock.

Can Caroline and Janet find Myra’s killer and her missing son?

Immensely readable, entertaining and brimming with authenticity, Knight’s series offers a one-of-a-kind heroine in Caroline – a woman who discovers that her retirement was only the beginning of a future she never could have imagined.

Myra Cade is a single mother, living with her father, Doug, and raising her son, Scott. She mostly keeps to herself and really has no time for anyone else. But shortly after serving paternity papers to Danny, the suspected father of Scott, she’s found dead at the side of the road in the country.

Caroline and her cousin Janet, who are taking Western riding lessons at the nearby Robinson Ranch, find themselves drawn into the murder investigation and looking for the missing boy and the murderer.

Since beginning writing in the eighth grade, Connie Knight has worked in publishing and the magazine industry. It was only when the author discovered her own unique ‘voice’ that becoming a novelist truly ‘clicked’.

“With this series, I have the chance to explore the Texas that I know,” says Knight. “Each day is like a voyage into the State that I love so much and the mysteries reflect my intense and passionate interest in Texas history, sociology, culture and habits. I use as much local language and color as possible to give readers an authentic experience.”

Continuing: “Caroline is the window for readers to look through – she’s studying Texas and her own history, so she provides that ‘way in’ and perspective. What I love about her is how she’s found this whole other path after one portion of her life ended. She may even find romance again! Readers tell me how much that touches them, and how much they root for Caroline in her adventures. What greater compliment can an author receive?”

Stay connected with Connie Knight through her official website.

About Connie Knight
Connie Knight grew up in San Antonio, Texas with many childhood visits to her family in the DeWitt County area. Her writing history includes work as a journalist and magazine editor. She now lives in Houston with her family and visits her cousins in the country. Chances Choices Changes Death follows Cemetery Whites in the Caroline Hargrove Hamilton Mystery series. 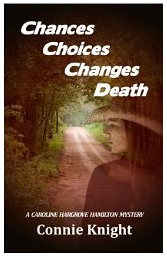