Fullerton, CA -- (SBWIRE) -- 10/22/2012 -- Secret City Comics Society (SCCS) will debut their first improv comedy show directly for children on Saturday, October 27, 2012 at 6:30 p.m. at their theater in Downtown Fullerton. The show consists of actors performing improv games and scenes specifically designed to entertain boys and girls ages 6 and older. The show is highly interactive and requires their involvement. The shows games and scenes will be based on suggestions taken directly from kids in the audience and some games will require audience volunteers.

On October 26-27, Secret City Comic Society brings back their Halloween Spectacular. It is during this special weekend that theater is transformed into a Halloween wonderland and special Halloween-themed games are dusted off the shelf and brought back as a "ghoulish delight".

Halloween also presented Secret City the opportunity to perform their first children's show during the Saturday show at 6:30. "Our shows throughout the year are unique because families can go out for a night of comedy and bring their kids to our shows knowing that its a safe place to laugh," says Bryan Shigekawa, General Manager. "But our regular show was designed strictly with older audiences in mind. We thought the Halloween season was the perfect time to introduce a children's show in one of our three shows that weekend."

"Throughout the year, we've performed shows for young audiences at schools, churches and summer programs in Orange County," says Alan Ng, Creative Director. "It dawned on us that we've never done a kid's show at our home theater in Downtown Fullerton. We love performing for all ages but we love even more the unique challenge facing us as we take suggestions that only kids can yell out."

Secret City Comics Society has been entertaining Orange County since June 2011 with their unique brand of clean all ages improvisation comedy. SCCS shows are Friday nights at 8:00 p.m. and Saturday nights at 6:30 and 8:30 p.m. Tickets for this show are discounted to $7.50 and can be purchased online. 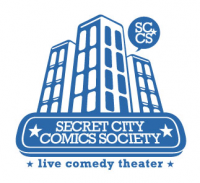