Multi-instrumentalist Savio Rego is proud to announce that his new music video “Be Mine” for his new jazz album entitled “All I Want” can now be watched on YouTube.

San Francisco, CA -- (SBWIRE) -- 04/25/2014 -- Multi-instrumentalist Savio Rego is proud to announce that his new music video “Be Mine” for his new jazz album entitled “All I Want” can now be watched on YouTube. This will give his fans, listeners, and jazz music enthusiasts a new and better way to enjoy Rego’s music. Through this music video, individuals can have a glimpse at how he displays himself and better understand the powerful messages that the song delivers.

Known for his “chill-out soul” style or a combination of Latin, R’n’B, pop, soul, electronic, and jazz, Savio Rego develops his interest on music by playing guitar when he was just 13 years old. He was introduced to a broad range of musical modes as he grew up. This has enabled him to improve his skills and eventually create his own signature sound – eclectic and modern mix of tones. His motivation, passion for what he does, and unique perceptions to music are what drive him or create music that greatly expresses his feeling and personality.

His debut album “All I Want” has been critically acclaimed since it was released. Some of the tracks included in the album were played in various jazz radio stations. “Miss You” was even played in the international commercial radio in Germany. Now, another track in the album “Be Mine” has a new music video on YouTube. Other tracks include “Falling,” “Moving On,” and “Senorita.” The way Rego showcases his personal musical understanding and perspective about smooth jazz music and Latin jazz can be depicted in this new music video.

Savio Rego’s passion for jazz and pop music does not stop in creating new compositions and having new jazz releases. He continually challenges himself to exceed any boundaries and strive to deepen his understanding about music. He also listens to musical perspective and perception of other musicians. Sting, Phil Collins, Eric Clapton, Sade, and India Arie are just some of Rego’s artistic influences. Aside from releasing new jazz album, Rego also have upcoming shows in Germany. He will be touring in Hainichen, Frankfurt, Tharandt, Berlin, and Meerane.

About Savio Rego
Savio Rego is a singer, songwriter who strives to create new mix of tones and music. His extremely well-written record “All I Want” has made him one of the most sonorous performers today. 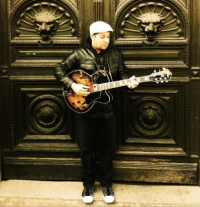