Singapore -- (SBWIRE) -- 09/02/2013 -- Bandai has generally been recognized for their high quality action figures for many years. Bandai is currently previewing their most recent action figure lines from Tamashii Nations, Robot Spirits and S.H. in Hong Kong with Tamashii Feature’s Vol.7. Figuarts, in an event that starts on August 31 and it lasts until September 1, 2013. It was held in InnoCenter in Hong Kong’s Kowloon side.

Bandai is known as a Japanese company involved in the production of toys, software development and manufacturing of Tokusatsu1. Bandai is definitely the third biggest producer of toys worldwide. The company is most commonly known for its Tamagotchi.

Bandai was started in 1950 and quite a lot of the toys manufactured in those days have grown to be collector's items. In 1977, Bandai Gashapon created capsules that contained collectible items which held 65% of the market.

Since 1980, Bandai is the leading toy company in Japan, and has to date a majority of the most popular licenses, including Saint Seiya, Tamagotchi, Digimon, Kamen Rider, Godzilla, Ultraman, Super Sentai series, Mobile Suit Gundam, Power Rangers and many others.

In fact, a wide variety of mecha anime series has been represented in their popular Robot Spirits line from Code Geass: Lelouch of the Rebellion to of course, Gundam.

Speaking of Robot Spirits’ Gundam line, attached to this article are some of their most recent articulated figures consisting of the Hi-Nu Gundam, the Kshatriya, The Wing Gundam (original version) and the Gundam Astray Out Frame.

The event in addition exposed the particularly high-priced solid gold Sagittarius Gold Cloth figure well worth somewhere around 55 , 000, 000 yen. It was exhibited along with other Saint Seiya figures.

“Being able to be present at the lunch of the event is something incredible for me and for all Bandai fans and collectors! I was waiting for it because I will have the great opportunity to see the new anime toys models and purchase some for my collection”, states Steven Longerback a member of sgcafe, the most reputable website of anime news and updates.

Obviously, S.H. Figuarts is absolutely not noticeably behind and they proudly displayed their famous Sailor Moon Figuarts line together with their very popular Kamen Rider line and their Armor Girls Project featuring the girls from IS: Infinite Stratos.

About Sgcafe
SGCafe (http://sgcafe.com) is a Japanese Subculture Blog. It is all about youth and popular culture Created back in 2004 and having a huge membership in the forums that is constantly increasing. 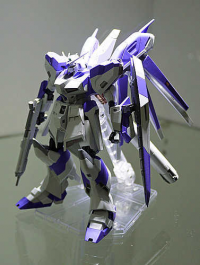