Altamonte Springs, FL -- (SBWIRE) -- 09/10/2012 -- G-Box has done it again with a hot new Mk802 form-factor Mini PC called the Dyno and is getting dubbed by the Android TV Box community as "The MK802 killer". While the Dyno looks like your typical Mk802, once you get under the hood you realize that there's a lot more going on here. Instead of the Allwinner A8 processor, G-Box has included an upgraded Amlogic A9 Neon CPU. Not only is the A9 a more powerful processor but it also runs cooler than the Allwinner A8. Now for the amazing part: The Dyno Android TV Box runs the Android XBMC media center in full 1080p HD with hardware decode supported. This is the first "Stick" style Mini PC that is capable of running XBMC with full hardware rending right out of the box! This brings XBMC one step closer to full exposure to the TV set world.

"Our goal when we designed the Dyno was based on XBMC. We know that XBMC development has been focused around the Pivios XIOS, so we developed the Dyno to not only include the same core hardware that you find in the XIOS, but to also cram it into the tiny Mk802 formfactor. Our goals have been met and at the end of the day we got to really make our impression on the TV box industry.” G-Box Android TV Mini PC

The Dyno, now out for only a few days, has already received much attention and speculation from the XBMC community because of G-Box's high-staking claims of running XBMC with full hardware support. The G-Box response officially is "Try it out for yourself. We've got this thing working and the word is going to spread like fire. Everybody will be getting a Dyno once it becomes well known that it supports XBMC hardare decoding." This is a huge impact on not only Android TV Boxes, but also XBMC in general.

Without a doubt the same question arrives, "What does this have to do with Ouya?". It is getting more relevant each and every day that Ouya is going to be late to the Android show. With more and more devices such as the Dyno coming out by G-Box there's really not going to be much left to impress on the day of Ouya's release, since there's already quite a few alternatives on the market already.

For more information on the G-Box Dyno and other all of the other G-Box TV box series please visit http://androidtvbox.us 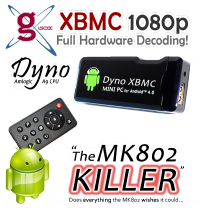