After the groundbreaking success of “Aging Imaginations," the time has come for Kirk Murray to tell another life changing story. However, Kirk needs to raise $23,042 through Kickstarter to complete his new venture named “Foreclosure.”

Los Angeles, CA -- (SBWIRE) -- 10/20/2014 -- Millions of viewers say that Kirk Murray’s previous movie titled ‘Aging Imaginations’ had a life changing impact on their lives. Led by the charismatic writer, director, and editor, MKW Productions is keen to recreate the magic once again. This time, Kirk is looking to make a film that revolves around people that have suffered and continue to suffer from the housing crisis.

Kirk Murray’s upcoming short film will tell the story of two brothers that end up kidnapping a bank manager to prevent a foreclosure on their house. However, the manager escapes from their custody. The remaining part of the movie is about an epoch making encounter between the two brothers that will completely unsettle the manager’s spiritual belief.

The American housing crisis started for the first time in the year 2008. This is the time when Kirk Murray wrote the initial version of ‘Foreclosure’ and shot it partially. However, it could not be completed because Kirk ran out of time and fund. Though six years have passed by, Kirk feels ‘Foreclosure’ is still relevant in today’s context because people are still losing their houses as a result of misdemeanors by the banks.

Talking about his inspiration behind making ‘Foreclosure,’ Kirk says, “There are tons of people out there losing their home, and their faith is shaken. After receiving so many emails and letters about how Aging Imaginations gave hope to the suffering, I feel that Foreclosure is an important story to be told. ”

If Kirk manages to achieve his finding goal, his production plan would be as follows: 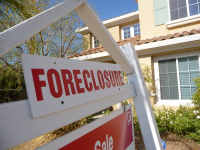