The One Known as Ace: New Novel by Christopher Cooksey Uses High School Comic Strip as Inspiration for Original Superhero.

Introducing the literary world to a much needed original superhero story, writer Christopher Cooksey proves that everyone can have their moment of superhero fame.

Milwaukee, WI -- (SBWIRE) -- 11/01/2012 -- Becoming a Superhero is the dream of many. Thanks to his vivid imagination and flare for storytelling, writer Christopher Cooksey has given himself and his friends exactly that privilege.

Following a comic strip he had worked on in High School, Cooksey developed a series of characters that were based on him and his friends. Developing his idea further, a truly original superhero was born and sent on many adventures as part of Cooksey’s latest novel – ‘The One Known as Ace’.

The One Known As Ace follows a young man named Troy Haden. When Troy loses his foster mother,Beatrice Weatherbee in a fire, he learns that she used to be a scientist for a terrorist organiazation. Beatrice was killed because she betrayed the organization and crippled its' operations.

Now Troy must use a power that has been dormant within him to hunt down this re-emergering terrorist cell before they can get to him first.

As the author explains, Troy is the character the world has been demanding.

“For a long time, people have been calling for a truly new and original superhero, along with the stories of how he uses his powers,” says Cooksey, a self-confessed superhero nut.

He continues, “So, I birthed Troy. He is practically perfect in every way.”

With critics and readers praising his book from all quarters, many are wondering what else is in store for Troy and his creator.

“This is just the beginning. Many more adventures wait. I urge people to monitor my website and keep in touch. You never know when Troy could pop up next,” Cooksey adds.

To find out more and to purchase the book, please visit: http://theoneknownasace.webs.com/ 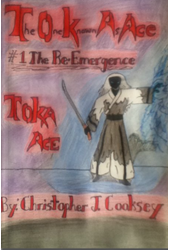