Turbotap has started the year with a comprehensive analysis the Vancouver real estate market, as well as where it’s headed in the coming year, written by Richard Morrison.

Vancouver, BC -- (SBWIRE) -- 01/12/2016 -- As the property market across the world is beginning to recover from the global economic downturn, properties in sought after areas in metropolitan centers of the major economic powers are reaching all-time highs. Vancouver is already one of Canada's major cities, and is now poised to become bigger than ever in the next fifteen years. The Richard Morrison Real Estate team is well established in Vancouver, Canada, and their initial 2016 market analysis for the city is mainly positive with a small caveat.

Richard's analysis is positive and encouraging for sellers and investors alike- the editorial starts explaining that last November was the second highest month on record for residential sales since 1989. The remainder of the article presents a compelling argument, drawing information from property, financial and even topographical data sets, to explain how Vancouver is in a uniquely strong position for property investment. Lastly it finishes with a small caveat due to the current market cycle pertinent to Vancouver.

The trends speak for themselves (http://www.turbotap.org/blog/2015/12/16/real-estate-market-forecast-for-vancouver-in-2016/): those who save as opposed to invest have lost out on interest versus property price inflation since 1970. The report enables people to feel confident in using the Richard Morrison Real Estate team to make their property decisions.

A spokesperson for Turbotap explained, "Richard has shown in detail what forces are acting to drive property prices higher and higher in Vancouver and he has demonstrated that they are not going away. With the election of Trudeau, because of Government spending more money will be placed into the economy creating inflationary pressures and property prices can escalate even higher than ever before, and that's why individuals need to start making investments now to maximize what they can gain from the upward trend. Vancouver is an incredible city with a bright future, and our initial report even shows the hottest neighborhoods to look in. But Richard also issues a caveat: We didn't get here in a straight line. As such there will be ups and downs ahead. However, in the end, because of inflation and the unique Vancouver market conditions we are confident in Vancouver. "

About Turbotap
Turbotap is a real estate search website for properties in Vancouver BC, including comprehensive listings of the latest and best properties available on the market, updated daily. The Richard Morrison Real Estate team has been established for 12 years in Vancouver and has successfully helped thousands of clients in the Lower Mainland. For more information please visit: http://www.turbotap.org/ 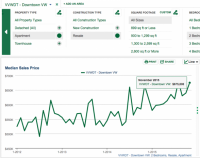