New York, NY -- (SBWIRE) -- 10/03/2013 -- While making their London debut last month, BBC Radio host Jo Good called Well-Strung “amazing, absolutely amazing” after their on-air performance and interview for her show. In the States, they’ve also been called the “hottest thing with a bow since Jennifer Lawrence in The Hunger Games” by the New York Daily News. Well-Strung: the Singing String Quartet returns for their first performances in NY of a new show directed by Donna Drake at XL Cabaret on October 4 and 25, for two performances only. The group has been on a roll: in addition to their London debut last week, they are just off of a three-month run at the prestigious Art House in Provincetown, two recent hit New York productions Off-Broadway in the past year, and their first album just released in spring. The new show will feature new arrangements of songs by Pink, Kelly Clarkson, Taylor Swift and Third Eye Blind among others as well as new material written by Jeffery Roberson (aka Varla Jean Merman). For tickets please visit www.well-strung.com or XL Club's Ticket Page.

The group first began performing together in a workshop production of the show directed by Ms. Drake at Ars Nova in NYC on Feb. 28th, 2012. Musical arrangements were by Mr. Levinson with additional arrangements by Mr. Shevlin. That same show sold out at Joe’s Pub in May of 2012 before having an extended debut run that summer at The Art House in Provincetown, MA and playing Off-Broadway at the Marjorie S. Deane Little Theater last fall. The group returned to Off-Broadway for the first three weeks of March, 2013, and sold-out the Highline Ballroom for one night in early May. Most recently they returned to P-Town for a summer-long run of a new show, and made their debut on London’s West End at the Leicester Square Theatre this month. The foursome’s debut album was released on Twist Records on February 28, and was produced by Matt Farber (Founder of LOGO Network) and Mark Cortale. The music video for their “mash-up” of Mozart meets Kelly Clarkson debuted this past summer and has been featured in the Huffington Post, ABC Television, and many other media outlets.

About Well-Strung
One Direction step aside, there’s a new kind of boy band on the circuit. The all-male string quartet Well-Strung features classical musicians who sing putting their own spin on the music of Mozart, Vivaldi, Rihanna, Adele Lady Gaga, and more! Their debut show sold-out Joe’s Pub on May 1st, 2012 in New York after being workshopped at Ars Nova NYC in February. Well-Strung stars first violinist Edmund Bagnell, second violinist Christopher Marchant, cellist Daniel Shevlin and violist Trevor Wadleigh. Well-Strung’s debut show is directed and co-written by Donna Drake and playing all summer in Provincetown, MA at The Art House. The quartet was formed by producer/manager Mark Cortale and Christopher Marchant . 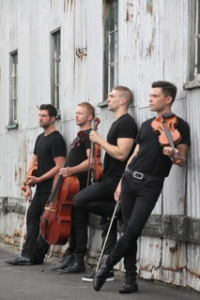