The Whiskey Barrel ice ball press is a device that converts a block of ice into a perfectly round 2.75" ice sphere, for use in whiskey and other cocktails. This press will make crystal clear or cloudy ice balls. The ice sphere melts slower than any other form of ice, since the surface area to volume ratio is the least of any shape. This means less dilution of your whiskey (or other beverage). It is uniquely designed, and shaped like a whiskey barrel. The ice ball press weighs in at a sturdy 16 pounds and is crafted from aircraft grade billet aluminum. The design creates more thermal mass, which the Company states makes it more effective and productive than smaller/lightweight ice ball presses. The Whiskey Barrel Ice Baller is anodized black, and then re-machined a second time to highlight the bands on the barrel.

"This is a unique, clean, elegant look and makes our product stand out and hands down this is the best looking ice ball press on the market. [And] compared to some presses, this is half the cost," Said project creator Jeff Wolf. "[O]ur Whiskey Barrel Ice Baller is class leading...sophisticated and finely machined like a precision watch. This ice ball press is ideal for home bars or whiskey bars- and it's the conversation starter at any party!"

Functionality appears to have also been paramount in the design and production of the Ice Baller. This Ice ball press has more features than any other ice ball press currently on the market today. Craft whiskey, bourbon and scotch connoisseurs will truly enjoy the benefits of making their personal ice ball for their perfect drink. Nobody likes diluted drinks, watered down by the melting ice. "Our massive ice ball melts slower than any other form of ice, and keeps drinks cold much longer, with less dilution than standard ice" a Company spokesperson stated. This is a perfect gift for that special person who enjoys a premium drinking experience.

Kickstarter is a funding platform for creative projects. Everything from films, games, and music to art, design, and technology. 'Backers' who support a project on Kickstarter get an inside look at the creative process, and help that project come to life. 'Backers' of The Whiskey Barrel Ice Baller Kickstarter campaign will receive a 'Reward' of one Whiskey Barrel Ice Baller Press, a silicone drain hose and a pair of stainless steel ice tongs for a pledge $275. Additional "package deal" Rewards are available at higher pledge level amounts. 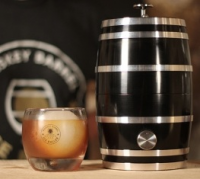