Yettigate Academy delivers educational graphic novels with fantasy and exercise based components that incorporate science, math and writing. The academy is looking to raise $4,000 via Kickstarter for the growth of their unique educational platform.

New York, NY -- (SBWIRE) -- 01/25/2017 -- Yettigate Academy has just started a Kickstarter campaign with the funding goal of $4,000. This unique graphic novel platform is primarily focused on science, math and writing by delivering compelling components based on fantasy and exercise. Funds raised via Kickstarter will be used for the future expansion of the platform.

Yettigate Academy was created initially as a fanfiction, and was later modified to a standalone title. The concept behind this educational graphic novel was inspired heavily by three facts. Firstly, information retention amongst children can be improved significantly by forming an emotional connection through storytelling. Secondly, it is much easier to retain focus by using color images. Finally, kids tend to treat a novel with more respect when it is received as a collectable. Yettigate Academy will deliver the comics as the part of a four week program at schools. The program will be similar to that of a read-a-thon, ideally suited for grades sixth to eighth.

After the completion of the four issues and exercises, each of the students will receive a T-shirt with prints of their favorite house and associated characters. The graphic novels will also be utilized by different drugstores, offering them as premium Graphic Novel/workbooks.

The main obstacle for Yettigate Academy right now is to build a relationship with charter or public schools for the read-a-thon like program. In case the program spans more than a few schools, they would also need graders.

To make a contribution to the Kickstarter campaign, please visit http://kck.st/2k9A4k4

About Yettigate Academy
Yettigate Academy is dedicated to delivering educational graphic novels with fantasy and exercise based components that incorporate science, math and writing. They have started a Kickstarter campaign to raise $4,000 for the growth of their unique educational platform. 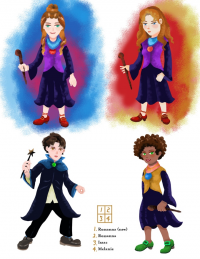