Harare, Zimbabwe -- (SBWIRE) -- 12/17/2012 -- VISUAL artist, Dana Whabira, 36, will be showcasing her work to the public for the first time in a one month collective exhibition titled "The Idea Of Self " at the National Art Gallery in Zimbabwe.

The National Gallery of Zimbabwe (NGZ) is a gallery in Harare, Zimbabwe, dedicated to the presentation and conservation of Zimbabwe’s contemporary art and visual heritage. The Gallery was officially opened by Queen Elizabeth The Queen Mother on the 16th of July 1957.

The exhibition which will feature artworks in multiple genres that explore issues of race, religion, ubuntu and the imagination. The exhibition is scheduled to officially launch on 13 December and run until January 21 next year.

Whabira said that her installation titled "Kiss, Kiss" is an exploration of the small house phenomena which has become topical in Zimbabwe in recent years.

"The small house phenomenon has arisen in society mainly because polygamy has become taboo. Secretive affairs are completely at odds with the open historical customary practice of a husband gaining the permission of his first wife to take a second wife."

She added that women caught up in small house dynamics are compelled often for financial reasons to compromise their positions within the family, community and society creating a facade of normality in order to keep up appearances.

She said that her debut exhibit consists of seventy-nine mannequin busts that are interwoven and interlinked with each other with the numerous bodies competing for space, representing the intimacies and intricacies of a promiscuous lifestyle.

The artist who studied art and design at Central Saint Martins College of Art and Design in the UK said that the conception of a mannequin in the installation as the ideal image of a woman is flawed by their damaged, battered, weathered and grubby appearance.

Mr. Raphael Chikukwa, curator of the exhibition, explained that without Ubuntu one can never be complete and arguably our culture is an important element of us all when one looks at these mannequins they all have scars that resemble those that most women live with.

"The installation is particularly poignant as the world commemorates 16 Days of Activism Against Gender Violence. The piece reveals what is hidden behind a perfect veneer of domestic bliss," Whabira said.

Whabira said that the idea of the title of her exhibit "Kiss, Kiss" came from the concept of kissing and making up in relationships.

"I have used it as a metaphorical device to explore the topic. I have separated it firstly as the kiss which is the moment when two lovers close their eyes to each other and invent the perfect partner. That's the start of the illusion, and then I have explored the make-up as a cosmetic cover-up, a lie or a fabrication of the truth. I also explored the make-up as a structural framework in the installation," she said.

The talented artist said that stories and events that happen in day to day life inspire her work.

"My work often takes a story or event as point of departure, drawing on current affairs, literature, language and metaphor for inspiration," she said, adding that she intends to take her art to greater heights beyond the borders of Zimbabwe. 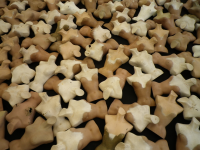