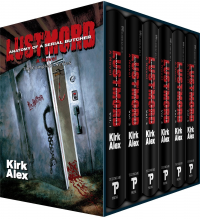 Part 2 and Part 3 of the 50 Shades of Tinsel series are also available on Amazon, with "Part 4: Lost" just released on May 4th.

About Kirk Alex
Kirk Alex is the author of numerous novels and stories, most notably the Lustmord series. His also a filmmaker, having made one of the early micro-budget horror films, "Lunch Meat", in 1987.

The Fifty Shades of Tinsel: Part 1 - Heartthrob $0.99 sale is only on Amazon at http://www.amazon.com/Fifty-Shades-Tinsel-Part-Heartthrob-ebook/dp/B00JUH994W