Vilnius, Lithuania -- (SBWIRE) -- 08/10/2015 -- Benediktas Gylys is part of a new breed of socially conscious entrepreneurs who has, perhaps because of the important evolution of the personal brand in the 21st century, undertaken to make as much of a contribution to the world as he has to developing his own fiscal success. He has pledged to focus on taking care of the world and its people, giving it equal focus to his commercial success. His foundation has so far financed a medical mission for 10 doctors to the Euromaidan riots in Kiev, Ukraine and supported the live animal's containers network built across Lithuania. Now, they are embarking on an ambitious worldwide creative project called Five Years From Now.

The project will be delivered to audiences around the world by 19 photographers from 18 countries located in 4 continents. The project will deliver a new and true story every three days on their Facebook Page, inspired the works of photojournalists like Humans Of New York but with a truly global reach, designed specifically to offer insight into a broad range of cultural experience and help people broaden their understanding as well as their horizons.

The not-for-profit album is scheduled to be published in 2017, with a collection of the best and most illuminating works from the contributors. The proceeds from the album will be used exclusively to fund future projects by the Benediktas Gylys foundation to inspire creativity and communication across cultures.

A spokesperson for Benediktas Gylys explained, "Five Years From Now is an exploration of where people around the world feel they are headed, recording their hopes for their futures while simultaneously looking to change them through better connection, understanding and the power of the online community. The photographers involved are doing amazing work discovering subjects and relating their stories, worries and hopes to a global audience. The album itself will be available in 2017, but anyone can follow its progress and development at our Facebook page."

About Benediktas Gylys
Benediktas Gylys is a terrible photographer, average soon to be published book author from Vilnius Lithuania who specializes in internet entrepreneurship. His foundation was established in 2013 to promoting entrepreneurship, science, tolerance, creativity and free self-expression by creating or funding various projects to enrich the human experience. 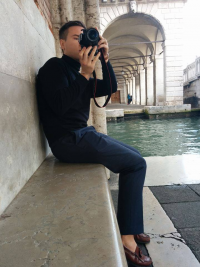