Me Too - What Happens when Sexual Abuse Goes Beyond the Workplace

London, UK -- (SBWIRE) -- 01/12/2018 -- A gripping new short read has laid bare the truth about sexual abuse in the workplace - and how victims can unwittingly protect perverts in positions of power.

Me Too, a new release by the British author Belinda Bennett, received a swift five star review from Readers' Favorite. Its reviewer, Susan Sewell, said: "This heartbreaking story demonstrates how the survival instinct works when perversion is at its basest. The depraved and twisted nature of Casey's husband is outrageous and sickening, but even more disturbing is the realistic reaction Casey portrays.

"This hit-the-nail-on-the-head account is an accurate rendition of an abusive situation and how the recipient excuses their aggressor. Although it was hard for me to read, this story gave me a good idea of how a victim relates to their situation and why they respond the way they do. This is an excellent true-life portrayal that can inspire women to stand up for themselves."

A Goodreads reviewer, who also gave the book five stars, said of Me Too: "I had a vague idea what the book was about but did not expect the twists that occurred."

Belinda Bennett, whose thriller Hired Hands hit the US bestseller list for Crime Fiction Noir last summer, says she was inspired to write a story from the perspective of a sexual abuse victim who marries her abuser. "It wasn't an easy book to write, but I felt compelled to look at this story from a fresh perspective," she says. "I wanted the victim to convince herself she was 'special', and that she was the only one."

The 52-year-old former newspaper editor adds: "The explosion in subscriptions to virtual private networks compelled me to include use of an anonymous server in this story. Overall, Me Too is a shocking, perverse short read - but one that just had to be told."

Me Too by Belinda Bennett, published in December, is exclusive to Amazon Kindle and is priced at 0.99c. It is listed at https://www.amazon.com/dp/B078FL7Q6G and can be read for free by subscribers to Kindle Unlimited.

Note to Editors: Book cover images and other graphics can be supplied on demand. 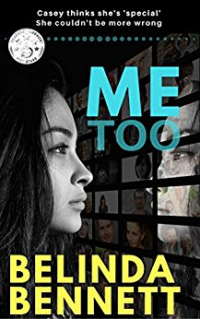