Miami, FL -- (SBWIRE) -- 06/25/2013 -- After just six days of the official music video teaser release on YouTube (the largest video sharing site on the planet), Richie Luna’s “Celebrate!” (The Call to Light) landed at the #1 spot on YouTube’s “Most popular videos around the web” chart.

Since then, Richie Luna’s “Celebrate!” (The Call to Light) music video teaser has generated over 1 million views and continues to rise rapidly due to heavy sharing on social media sites such as facebook, forcing the video to go viral on the web.

His story has a beginning, and ultimately an end.

It seems as if Richie Luna plans to create a sort of web series, where each story, song and music video leads to another. Similar to a movie sequel format.

What people will learn after visiting his website at http://www.DefeatTheDark.com is that there is a war taking place between “The Heroes of Light vs The Forces of Darkness”. In this case, those who follow the light (Lunas) tend to be people who are more positive in energy, and who want to celebrate the bright side of life, whereas, those who follow the forces of darkness (Darkones), lean towards a more negative, depressive and destructive lifestyle.

Richie Luna’s music and music videos therefore, are supposed to act as a positive, uplifting enlightenment for everyone who experiences it either on their laptops, notebooks, smartphones, tv sets, radios, or in their city nightclubs.

Richie Luna is also achieving all of this independently and is relying on his fans to support this movement in order to be able to produce and release more content; either through purchasing his new music single “Celebrate!” (The Call to Light) on itunes, or by contributing through his donation page on his website at http://www.DefeatTheDark.com/donate.php; very similar to other crowd funding websites in which different rewards are delivered for different donation amounts at different times.

It is therefore up to the people of the planet to support Richie Luna so that everybody can see more of this epic adventure unfold. 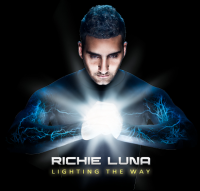