Dan Frank’s ‘1 Week’ is as much a critique of the nation’s inability to finance itself as it is an engrossing and entertaining story. Politics, the economy and history collide as protagonist Hank and two leading ladies attempt to develop schemes to recover the five-trillion dollars lost in the 2008 recession. What ensues is a thought-provoking wakeup call to each and every reader; can Godless governance at a Federal level ever produce fruitful results?

Springfield, IL -- (SBWIRE) -- 10/07/2014 -- U.S. unemployment is at a six-year low, durable goods sales and export numbers are at record levels, yet the average American’s personal pocket book remains stagnant. In his compelling and illuminating new novel, author Dan Frank attempts to explain why.

‘1 Week’ follows the story of a family of Billionaire American duck hunters who uncover and attempt to plug a leak that cost the country over five-trillion dollars since the 2008 recession. Critics have described the book as the antithetic inverse of Ann Rand’s ‘Atlas Shrugged’; a reminder that faithless governance won’t pay the world’s bills.

A Gumpish tale, minus the box of chocolates, 1 Week features an ensemble cast of characters touting political, economic and historical issues in a fresh light. This family of billionaire duck hunters delivers an arsenal of penetrating ideas guaranteed to revive discussions with family and friends at the dinner table. Come navigate the field of decoys in the plot. This just might be your cup of life changing elixir. As the stalwart brother who stayed home to tend to the family's broadcasting business, Hank Montague shoulders the full responsibility for keeping fortune and family together under challenging circumstances.

Plagued by issues with his prodigal brother and the business, Hank Montague escapes into the passions of two women in his life. One lady he chose, while the other was chosen for him; however, this bed of roses is overgrown with thorns. Frustrated with Hank, the ladies develop competing schemes for restoring the five trillion dollars Americans lost in the 2008 recession. When an heir disappears, two infamous evangelists are retained for their detective prowess. These gentlemen nudge the plot along with an artful retelling of history. They'll reveal unconventional applications for ordinary household appliances and reinvent fire while uncovering a plot plaguing America's youth. The plot is a minefield of decoys like the street-smart New York detective determined to cut himself a fat slice of the family treasure. Toss in a savvy uncle with quiet charm and an eye for the ladies, and Hank has his hands full. Hank is the heir to billions, but he is the unprepared heir to an insightful treasure that towers over the family fortune. Cashing in means having to navigate a foggy bog of submerged decoys that lack the innocence of Gump's perennial box of chocolates.

“I’m not attempting to just explore the nation’s ‘financial funk’, but also provide some answers,” explains Frank, who based the character of Hank off his own experiences being forced into action after an investor offered $500,000 to fund the purchase of a restaurant. “In its final chapters, the characters ponder four fixes that promise to add trillions to our domestic American economy and trillions more globally, provided we distribute internationally the cost of food savings put in place by former Sec of Agriculture Earl Butz. Butz cut the cost Americans pay for food in half. We enjoy the cheapest food on the planet, but those cost savings were never distributed internationally.”

Continuing, “There’s a catch that parallels the dilemma faced by the book’s protagonist in this final chapter. Unleashing the savings to finance the next big global innovation is an exercise in futility absent taking the time to unravel the atheistic ideals governing our currency supply. Americans will continue to plummet into poverty apart from correcting 20 years of atheism at the Fed courtesy of Ann Rand and her prodigy, former Fed Chair Alan Greenspan.”

Hank will require perfect timing and a careful aim in his pursuit for love. Holding out is never easy or straightforward, proving that life always requires the best ‘up-front’ and that Godless governance is a slippery slope to national collapse.

Those looking to explore these concepts further are urged to purchase their copy of the novel as soon as possible.

About Dan Frank
In 1993, a friend stacked $250,000 on Dan's desk and dared him to open another restaurant. However 90 days later, Dan purchased a $500,000 restaurant with funding he procured from a different investor. He recalls how desperately he needed the $250,000 challenge. Hank Montague, the protagonist in ‘1 Week’ is modeled after that experience of being provoked to action. Two characters in ‘1 Week’ pick up the challenge of recouping the five to eight trillion dollars Americans lost in the 2008 recession. In recent years Dan has worked as a union teamster constructing power plants and pipelines. He finds that God often uses those daily interactions with up to 4000 men to usher in that next threshold of faith. He finished ‘1 Week’ in June 2013 and soon found himself on a bus for two hours a day with six fellow pipeline workers. It took five months to connect with each of those men in faith. Dan recalls how the spirit instructed him to use his faith to believe for each of these individuals. Praying for these men changed Dan's perception of faith. It became impossible to see these men as they were. After that five month walk in faith, God brought along a fellow believer and restaurant manager in Rangeley Colorado who encouraged Dan to publish ‘1 Week’. 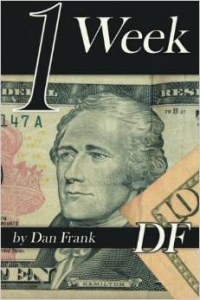