Set in a dystopian future where the population of the United States is strictly controlled, ‘2BR02B’ has thrilled millions of fans since its release in 1962. As popular today as ever, the story is about to be turned into a stunning short film by an internationally-acclaimed crew. However, before yelling “action”, the crew are calling on fans to help fund their most unique project.

Vancouver, BC -- (SBWIRE) -- 11/22/2013 -- Imagine a future where the Federal Bureau of Termination humanely control the United States’ population and, before a family can have a child, an existing citizen must volunteer to die. This story has captured the attention of millions as the premise behind Kurt Vonnegut’s legendary 1962 short story, ‘2BR02B’ (pronounced to-be-or-naught-to-be).

Fifty years after its original release, two young screenwriters are working diligently to turn Vonnegut’s short story into a compelling film. To date they have enlisted an internationally-accredited film crew, support from some of the movie industry’s top marketing brass and even an A-List actor to play the lead character. However, there’s only one thing stopping the project from getting the green light – funding.

To get the filming underway as soon as possible, Derek Ryan (screenwriter) and Artin John(producer) have launched an exciting crowdfunding campaign through Indiegogo.com, hoping to raise $20,000 in the process.

“We have everything in place, including a Hollywood A-Lister (who we’ll soon be naming) to play the lead role of Dr. Hitz. This could be the biggest indie Sci-Fi picture release of the year and it has limitless potential for a full-length movie or television series. All we now require is funding to get us underway,” says Derek Ryan, who met Artin John while working on the set of ‘Percy Jackson: Sea of Monsters’.

He continues, “We’ve got some great rewards ranging from digital downloads of the final film and an opportunity to have your picture featured right through to a chance to be present during filming and be credited as an official Executive Producer. We urge people back us now; we’re literally ready to go.”

“All of us here are intrigued by the story of 2BR02B. It asks questions that all of us can understand; how far would you go for your family? Are we logical or emotional creatures? What is going to happen to our future? But to do this story justice, we need you all to join our team! Those who are fans of the story will appreciate our treatment of it, while those new to 2BR02B will be captivated by the story,” he adds.

With less than a month left to raise the required funds, Ryan and John are urging all interested backers to act right away. Pending the campaign’s success, filming is scheduled to commence in January of 2014.

For more information or to invest, visit: http://www.indiegogo.com/projects/2br02b--3

Synopsis of original story
Set in a dystopian future where population is strictly controlled, a Father waits for his children to be born. Problem is, in order for his kids to survive, three people must die. In a deserted hospital waiting room, one man must ask himself exactly what he is willing to do, to give his children a chance at life, any life at all. 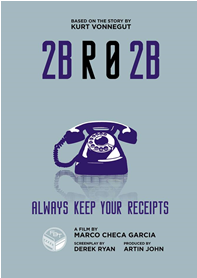