Traverse City, MI -- (SBWIRE) -- 08/21/2013 -- Did you know that the casino offers a bet that has been in existence since 1936 that no one has ever won? That over 95% of casino patrons who frequent the Green Felt Jungle will lose their shirt to an industry whose sole purpose is to send them home empty-handed?

Casino insider Mark Pilarski believes that if those who make their one-way contribution to the adult neon arcade followed the gambling guidelines on his updated Hooked on Winning audio soundtrack, every casino would be forced to close its doors. Better yet, he is certain that if you followed this one golden nugget of advice, “only make casino bets that have a house advantage of two percent or less,” Las Vegas, Atlantic City and every saw dust joint in between would be boarded up in six months.

“Venturesome gamblers need this essential information, so they can enjoy gambling without being wrung dry by a cannibalizing industry that preys on the uninformed player,” says Pilarski, who has worked for 18 years in seven different Nevada casinos, and for the past 16 years has written a nationally syndicated column called Deal Me In. He knows first hand that for most uninformed casino players, the probability of winning against the Lords of Chance is slim to none. “The casinos much prefer the uneducated masses, making dumb bets, wagers that have a house edge higher than the interest their customers pay on their Visa card. Against those obstacles, education, not luck, is the most important element to beating the casino,” declares Pilarski.

Mark Pilarski puts his 35-year casino career to work for the listener by providing sound, practical, insider information on how to best exploit the casino on their next visit. Advice that includes; Surviving at slots and video poker, best bets in the casino, winning blackjack, simplified craps with confidence, sensible money management, and hundreds of tips, techniques and winning strategies.

Besides dropping the price of his best-selling Hooked on Winning audio series from $12.95 to $0.99, Pilarski has updated it with 30 minutes of bonus material on changes to the casino landscape. For instance, he talks about some of the newer games like Let it Ride and Three Card Poker, rule variations such as six-to-five for blackjacks, and technological upgrades like continuous shufflers, ticket-in ticket-out machines, and the value of Casino Player Cards. Combined, it is over two and a half hours of the same gaming material that Pilarski used when he taught a college course on gambling.

Pilarski’s creed to those who gamble: “The smarter you play, the luckier you’ll be.” The “smarts” are included on this audio recording.

The Hooked on Winning audiobook can be digitally downloaded at at Amazon.com, cdbaby.com and Google Play for only $0.99, or iTunes for $1.99.

ABOUT MARK PILARSKI
As a recognized authority on casino gambling, Mark Pilarski has spent 35 years in the casino industry, 18 of those on the inside working in seven different Nevada casinos. Mark now writes the nationally syndicated gambling column Deal Me In, is a university lecturer and a reviewer and contributing editor for numerous gaming periodicals. 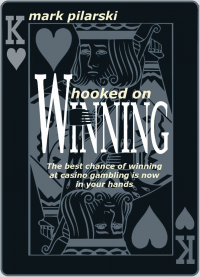