Jane Velez-Mitchell’s new book Exposed: The Secret Life of Jodi Arias hits stores August 20th and is being billed as one of the most insightful crime reads of the summer.

North Hollywood, CA -- (SBWIRE) -- 08/12/2013 -- TV host of HLN’s Jane Velez-Mitchell show is not afraid to speak her mind. She delivers uncensored opinions and keen observations on our country’s most stunning crime cases. Now, her upcoming book Exposed: The Secret Life of Jodi Arias reveals shocking and disturbing new information about convicted murderess Jodi Arias and the revenge plot she carried out against her ex-boyfriend Travis Alexander…. and how she used sex to get within striking distance.

In Exposed: The Secret Life of Jodi Arias, best-selling author Jane Velez-Mitchell offers many lessons we can learn from the Jodi Arias trial. Here’s the top 5 list:

1. Don’t Sleep With the Enemy

Travis Alexander was brutally murdered by Jodi Arias right after they finished having sex. He’d already told friends she had slashed his tires, hacked his email and committed various other treacherous acts against him. She was his enemy but, while he knew this intellectually, she was able to use her sexuality to disarm him and manipulate him into just one more encounter. Intimate partner violence is a huge problem in America. In these cases, the point at which one person ends the relationship is always the most dangerous, especially when the person ending the relationship remains in close physical proximity to the person they’re rejecting. Rejection often leads to feelings of rage and a desire for revenge.

Jodi Arias is a pathological liar. She has a hard time telling the truth about anything. This was documented during the trial when she brazenly lied to detectives first telling them she wasn’t there, then telling them 2 masked ninjas attacked Travis. Despite being under oath, Jodi Arias told lie after lie during her 18 days on the witness stand, trying to paint Travis as a sadistic sexual deviant when the evidence revealed he was very sexually inexperienced until becoming involved with Jodi Arias. Liars are dangerous people. We catch people in lies all the time but assume it’s not a big deal if they’re not lying about something important. Liars lie. If you catch someone lying about something trivial more than once, assume they lie all the time. The books message: don’t trust them about anything.

3. Be Wary of Transients

Jodi Arias couldn’t stay at the same job for very long and kept moving from town to town. While our society is more mobile than ever before and people move frequently for work, there’s a different between that and someone who is exhibiting transient behavior as Jodi Arias did. From her teenage years on she moved repeatedly from Yreka, California to Santa Maria, to Medford, Oregon to Big Sur, California, to Palm Desert, to Mesa, Arizona and back to Yreka. During those times she held many, many different waitressing jobs. This was a symptom of her borderline personality disorder, which is characterized by alienation and an inability to fit in. When somebody is that transitory it’s a warning sign that they may be deeply troubled. When first dating someone it’s important to get a sense, not only of what they do for a living, but of where they have been. Get an in-depth biography and timeline before you get too involved with a love interest. You may even want to do a little detective work and double-check their story.

By now we’ve all heard that 90% of communication is non-verbal. It’s true. And, perhaps the most important communication is what we tell ourselves via our intuition. Travis’ friends were getting very creepy feelings about Jodi Arias but they couldn’t quite put their finger on what was bugging them about her so much. They were picking up on something very important. Her non-verbal cues were sending off signals that something was very wrong with her mental and emotional state. Ultimately, after she murdered Travis and was put on trial, the prosecutor’s psychologist officially diagnosed her with borderline personality disorder. But, long before the horrific killing, Jodi was telegraphing that she was unstable. Some of Travis’ friends warned him about her. They were right to act on their gut. We’ve all had the experience of a friend introducing us to a new love interest and groaning as we wonder how our friend could pick someone so “off.” We assume it’s not our business and usually say nothing. But, only true friends will tell us what we don’t want to hear.

5. Women Can Be Violent

According to Exposed: The Secret Life of Jodi Arias, Travis Alexander had every reason to be fearful of Jodi Arias. And during the trial evidence showed, toward the end of his life, he did express fear of her. However, Travis’ friends have also said that the fact that Jodi was a petite, very thin woman who was also soft-spoken and generally demure may have given him a false sense of security. After all, the vast majority of violent crimes in this country are committed by men. When women are put on trial it’s fascinating precisely because it’s a statistical aberration. But, today’s America is awash in what has been called “the great equalizer.” Guns. Prosecutors laid out a convincing case that Jodi Arias staged a break-in at her grandparents’ Yreka, California home so she could steal her grandpa’s gun and take it to Mesa, Arizona and murder Travis. While she began by stabbing him in the chest and shot him after he was likely already dead, the point still applies. Women can be physically violent and, when they have the advantage of a knife, a gun and the element of surprise, can overpower a much larger male. Women are human and humans are a very violent species.

Exposed: The Secret Life of Jodi Arias is emerging as one of the most provocative crime books this year packed with exclusive new information and psychological insight. It is available at Amazon and other major book retailers. A portion of the net profits is going to charity. The book is dedicated to victim Travis Alexander and his siblings.

About Jodi Arias
On June 4, 2008 devout Mormon and motivational speaker Travis Alexander was found murdered by Jodi Arias in his home in Mesa, Arizona, having sustained multiple stab wounds, a slit throat, and a gunshot to the head. Despite her claim of self-defense, on May 8, 2013 Alexander's ex-girlfriend Jodi Arias was convicted of first-degree murder in his death. The jury hung on the penalty phase and she is expected to be retried soon to decide whether she will get life or death. The next hearing is scheduled to occur within days of the book’s release. 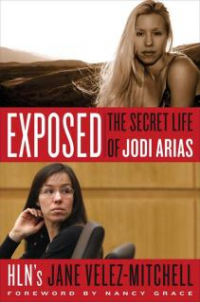