This is the question examined by bestselling author DON BROWN in the novel THUNDER IN THE MORNING CALM, released last year by Zondervan/Harper-Collins in conjunction with the upcoming 60th Anniversary of the Armistice of the Korean War.

Brown set out to pen the novel, he said, simply to honor Korean War veterans on the 60th Anniversary of the Armistice. But as he continued his research, be became convinced that a number of Americans had been left behind there. “Our government in 1953 denied that any Americans had been left behind in North Korea,” Brown said. “Despite the fact that there had been numerous sighting of elderly Americans coming out of North Korea for over fifty years, our government continued to officially deny that we had left Americans behind there.”

But the US government’s official position was contradicted in 1996, Brown said, when the Eisenhower presidential library released previously-classified documents admitting, for the first time, that the US knew over 960 Americans has been left behind in the North, but did nothing about it.

Brown’s claims are reinforced by a September 17, 1996 article in the New York Times, written by investigative reporter Philip Shenon, which indeed that the “Dwight D. Eisenhower Presidential Library and other Government depositories by a Congressional committee, show that the Pentagon knew in December 1953 that more than 900 American troops were alive at the end of the war but were never released by the North Koreans.”

The New York Times article goes on to say, “in June a Defense Department intelligence analyst testified that on the basis of ''a recent flurry'' of ‘very compelling reports,’ he believed that as many as 15 Americans were still being held prisoner in North Korea.”

According to Brown, eyewitness accounts of elderly Americans in North Korea continued to leak out until 2005 or 2005. “Is it likely that any Americans are still alive? Maybe not,” Brown said. “But is it possible? Absolutely. Many World War II vets are still alive, and some Civil War vets survived seventy-five years after the Battle of Gettysburg.”

Brown said the he hoped that THUNDER IN THE MORNING CALM would draw attention to the American POWs and MIAs from Korea, and if there is even a slim chance that even one could be alive, that somehow any POWs, like the POWs held in North Vietnam, could come home again.

“Those guys would be in their late seventies and early eighties now. So who knows? I wish this country would wake up to the fact that they were left behind. We owe them that.”

About Don Brown
Don Brown is the author of Malacca Conspiracy, The Navy Justice Series and Black Sea Affair, a submarine thriller that predicted the 2008 shooting war between Russia and Georgia. Don served five years in the U.S. Navy as an officer in the Judge Advocate General's (JAG) Corps, which gave him an exceptional vantage point into both the Navy and the inner workings of 'inside-the-beltway' as an action officer assigned to the pentagon. He left active duty in 1992 to pursue private practice, but remained on inactive status through 1999, rising to the rank of Lieutenant Commander. He and his family live in North Carolina, where he pursues his passion for penning novels about the Navy. 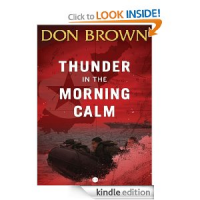